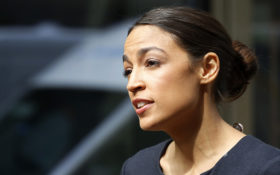 Never shy, the liberal big mouth is always looking for an opportunity to record a soundbite.

But in the wake of the Sir Lankan travesty – the heartless slaughter of more than 300 Christians by radical Islamic terrorists– Ocasio-Cortez has been totally silent.

No, seriously, she hasn’t said a thing.

It’s the exact opposite of her reaction to the Christchurch massacre, when a white racist gunned down nearly 50 innocent Muslim worshippers.

Ocasio-Cortez was outspoken and condemned the terror attack repeatedly then.

At 1st I thought of saying, “Imagine being told your house of faith isn’t safe anymore.”

But I couldn’t say “imagine.”

Because of Charleston.
Pittsburgh.
Sutherland Springs.

What good are your thoughts & prayers when they don’t even keep the pews safe?pic.twitter.com/2mSw0azDN8

This is a time of great vulnerability for our communities.

We must come together, fight for each other, & stand up for neighbors.

We cannot stand for it.

Nothing. And others have noticed, including Piers Morgan.

Although she’s new to the House, Ocasio-Cortez and her pals have been playing this hypocritical game for a long time.

To the far-left, terrorism only counts under certain circumstance. When it’s jews or Christians or Westerners that suffer, they suddenly have nothing to say.

That’s the message Ocasio-Cortez wants to share to with voters.

The silence has been heard loud and clear.