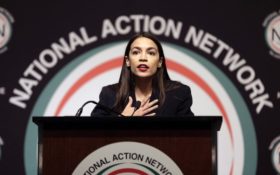 Democrats are furious over special counsel Robert Mueller’s report — and Rep. Alexandria Ocasio-Cortez, D-N.Y., isn’t going to let things like “facts” get in the way of her feelings.

Ocasio-Cortez spent Thursday signing a petition for an impeachment resolution on President Donald Trump after Mueller’s report, insisting it was her duty to remove the president from office… even though investigators concluded that he did nothing wrong.

The resolution, drafted by fellow far-left legislator Rep. Rashida Tlaib, D-Mich., calls for a congressional vote on whether or not Trump obstructed justice. In other words,

Congress would use special counsel Robert Mueller’s probe as source material. In other words, House Democrats — led in part by Ocasio-Cortez — aren’t happy that Mueller concluded there was no evidence of crimes committed. They want a new conclusion.

“It is our job as outlined in Article 1, Sec 2, Clause 5 of the US Constitution,” wrote Ocasio-Cortez. “As such, I’ll be signing onto @RashidaTlaib’s impeachment resolution.”

Mueller’s report is clear in pointing to Congress’ responsibility in investigating obstruction of justice by the President.

It is our job as outlined in Article 1, Sec 2, Clause 5 of the US Constitution.

As such, I’ll be signing onto @RashidaTlaib’s impeachment resolution. https://t.co/CgPZJiULOL

Ocasio-Cortez wants Democrats in Congress, not investigators, to determine whether or not Trump obstructed justice.

Mueller never found any evidence the commander-in-chief committed a crime — and that’s unacceptable to Ocasio-Cortez.

Many know I take no pleasure in discussions of impeachment. I didn’t campaign on it, & rarely discuss it unprompted.

We all prefer working on our priorities: pushing Medicare for All, tackling student loans, & a Green New Deal.

But the report squarely puts this on our doorstep.

Even though the former 12-year FBI director couldn’t dig up a single shred of evidence on Trump, Ocasio-Cortez will make her own conclusion.

Mueller decided against proceeding with charges — and that’s unacceptable to liberals.

Democrats in Congress realistically want Americans to think they’re after the truth?

Democrats say they know the truth… the truth a crack team of investigators that spent years working on somehow missed? And all of a sudden the American people are supposed to believe them?