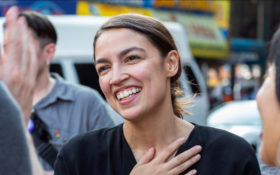 Ocasio-Cortez isn’t interested in waiting another second to impeach President Donald Trump — and no one better get in her way.

During an interview Sunday morning on ABC’s “This Week,” Ocasio-Cortez made it clear that she and her far-left wing of the Democratic Party do not want to wait any longer to open an impeachment inquiry into the president… and that core liberal voters are ready to vote out anyone that doesn’t agree.

“I think every day that passes the pressure to impeach grows. It’s justifiable. I think the evidence continues to come in and I believe that with the president now saying that he’s willing to break the law to win re-election,” Ocasio-Cortez said.

When asked about progressive frustration that Pelosi won’t begin impeachment now, Ocasio-Cortez tore into the House speaker a second time.

“I think it’s quite real. I believe there is a very real animus and desire to make sure that we are holding this president to account,” Ocasio-Cortez argued, implying that there’s no need to wait any longer on impeachment.

RT @kylegriffin1
Rep. @AOC: "I think every day that passes, the pressure to impeach grows and I think that it's justifiable, I think the evidence continues to come in."
Via ABC pic.twitter.com/vzO0XhSqNR

Later in the interview, Ocasio-Cortez admitted that Democrats are at risk of losing in 2020 to Trump.

“I think that we have a very real risk of losing the presidency to Donald Trump if we do not have a presidential candidate that is fighting for truly transformational change in the lives of working people in the United States,” Ocasio-Cortez admitted.

This is the second time this month that Ocasio-Cortez has publicly attacked Pelosi over whether Democrats should remove Trump from office… for no reason other than the fact that Democrats dislike the president.

During an interview on CNN last week, the New York socialist lawmaker was asked if she was satisfied with Pelosi’s approach of waiting until there is “iron-clad evidence.”

Ocasio-Cortez said she is not even close to happy about waiting and demanded action right now.

“I think that an impeachment inquiry is right on our doorstep,” Ocasio-Cortez said, adding she is “concerned” about where the line to begin proceedings has been drawn.

“If now isn’t the time … what is the bar, what is the line that we’re waiting to be crossed for an impeachment inquiry, and so far it doesn’t seem like there is one,” Ocasio-Cortez said.

“And so without a clear boundary, it seems as though we’re kind of sitting on our hands,” she added. “So, if now isn’t the time, then I think a lot of folks would like to know; When is the time?”

Ocasio-Cortez and her band of far-left allies want to go scorched earth and do whatever it takes to remove Trump from office to appease radical leftists.

But Pelosi and her Democratic allies know they’re weak politically — which is why they’re only talking impeachment rather than actually going through with the divisive action.

This is another reminder that despite what Pelosi says, Ocasio-Cortez thinks she is running the Democratic Party and calling the shots.