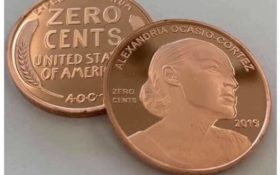 Penny for your thoughts?

Critics of Rep. Alexandria Ocasio-Cortez, D-N.Y., would say that that phrase means a freebie with the freshman congresswoman.

But some savvy internet users took things a step further and have made the idea a reality.

The coin has the term “Zero Cents” (get it… no sense?) on the back, and Ocasio-Cortez’ face where former President Abraham Lincoln normally appears on the front.

It quickly became one of the top sellers in the “Individual Collectible Coins” section of Amazon.com, reaching as high as #3 overall in the best seller category. 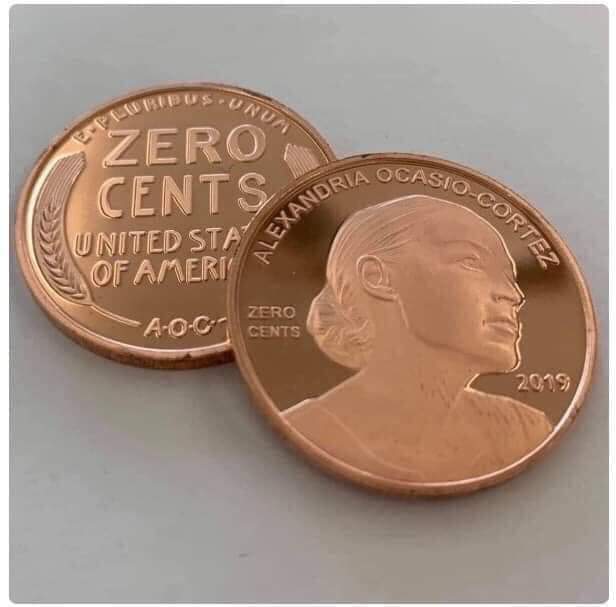 This isn’t the only laugh being had at the expense of the self-declared socialist Congresswoman.

Ocasio-Cortez recently posted a video online of herself criticizing the “bogus” Electoral College system because it empowered “slave owners.”

“I’m not taking it back,” said of her opposition to the presidential electoral process. “It’s bogus, it’s a scam. I talked about how bogus the Electoral College is and Fox News got really mad… For all these folks that say the Electoral College is to instill fairness, well, we literally only select one very narrow group to allow their vote to count more than other people,” she said.

She claimed American elections were set-up this way because the founding fathers were all racists.

“This original compromise was to accommodate slaveowners, so it’s codified and institutional,” she claimed.

Fox News’ Sean Hannity pointed out that Ocasio-Cortez was making boxed Mac-n-Cheese while she attacked the founding fathers, calling it “Deep Thoughts with AOC.”

Former Arkansas Gov. Mike Huckabee got in on the action, too.

“The great sage, AOC, apparently didn’t take Civics so she wants to get rid of the Electoral College,” Huckabee said. “The college we need to close is the one who gave her a degree! She won’t watch this, but hope you will. Electoral College is good for Dems and GOP.”

The great sage, AOC, apparently didn't take Civics so she wants to get rid of the Electoral College. The college we need to close is the one who gave her a degree! She won't watch this, but hope you will. Electoral College is good for Dems and GOP. https://t.co/1wRD6fM9mx

Finally, some common “cents” from a politician!