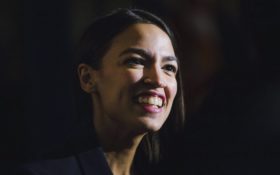 Rep. Alexandria Ocasio-Cortez, D-N.Y., is a controversial figure known to bend the truth to advance her political agenda.

On Thursday, conservative social media users fought back — and what AOC’s critics had to say about her latest lie quickly went viral.

The U.S. Department of Agriculture (USDA) finalized three rule changes for the Supplemental Nutrition Program (SNAP) on Wednesday. AOC responded on Twitter and claimed she would have “starved” if these rules had been put into place un

“My family relied on food stamps (EBT) when my dad died at 48. I was a student. If this happened then, we might’ve just starved. Now, many people will,” Ocasio-Cortez claimed on Twitter.

“It’s shameful how the GOP works overtime to create freebies for the rich while dissolving lifelines of those who need it most.”

Wrong. Under current rules, work-eligible and able-bodied adults without dependents and between the ages of 18 and 49 can currently receive only three months of SNAP benefits in a three-year period if they don’t meet a new 20-hour work requirement.

This doesn't apply to children, the disabled, seniors, or anyone with dependents. No one is going to starve, you drama queen.

But by all means, this is a great argument for why food assistance shouldn't be a federal program.

You're very dishonest to Tweet this, since it isn't true. You people always cry about Fake News but have no problem just blatantly lying, do you?

Create “freebies” for the rich @AOC? You and your radical, socialist crew believe the Forgotten men and women, every day middle-class Americans are the “rich”. Tax relief for hard working Americans is hardly a “freebie” ????

This woman is such a liar & fraud. She knows full well that Trump’s new food stamps policy only applies to people between the ages of 18 & 49 who are childless and not disabled. So it wouldn’t have affected her sob sorry.
She preys on the ignorant to stir up hatred & division

Areas with high unemployment rates or a demonstrable lack of sufficient jobs can waive those time limits.

The new rule imposes stricter criteria states must meet in order to issue waivers. Under the plan, states can only issue waivers if a city or county has an unemployment rate of 6% or higher. The waivers will be good for one year and will require the governor to support the request.

The final rule will be published in the federal register Thursday, and go into effect in April.

“We want to encourage people by giving them a helping hand, but not an infinitely giving hand,” he said.