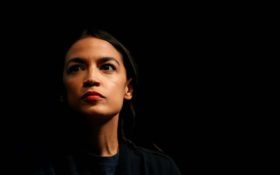 Rep. Alexandria Ocasio-Cortez’, D-N.Y., freshman year in Congress has been a wild rollercoaster ride — and it may have all come to a sudden end on Thursday night.

The far-left lawmaker has driven her crazy train across party lines. She’s insulted Republicans, slandered law enforcement, attacked the president, called our border patrol agents ‘Nazis’ and, above all, spit in the metaphorical face of America’s institutions.

Her fellow Democrats have had enough of Ocasio-Cortez uncontrolled tantrums — and Congressional Black Caucus members called her out on Thursday.

For the far-left social justice warrior, this could be a deathblow to her career.

Ocasio-Cortez accused House Speaker Nancy Pelosi of being a racist on Wednesday.

It’s the oldest Democrat political trick in the playbook — but when it was thrown back in their face, it left establishment Democrats furious.

Rep. William “Lacy” Clay, D-M.O., a veteran leader of the Black Caucus, absolutely destroyed AOC. He told Fox News, “It is so inappropriate. So uncalled for. It does not do anything to help with unity. It was unfair to Speaker Pelosi.”

“What a weak argument, because you can’t get your way and because you’re getting pushback you resort to using the race card? Unbelievable. That’s unbelievable to me,” Clay said. “I could care less. I could really care less. I agree with the Speaker. Four people, four votes out of 240 people, who cares.”

“It’s damaging to this party and the internal workings of the Democratic Party,” Clay said.

“We all must work together, pull together for the country’s good,” he said.

But the moderate Democrats are quickly finding out that after nearly seven months on the job, Ocasio-Cortez has no intention of bringing anyone together.

Months ago, reports surfaced of a rift between Pelosi and the far-left Democrats over Ocasio-Cortez’ embarrassingly bad Green New Deal. The tension between the two lawmakers has only grown worse.

Now that the explosive rift and dysfunction of the Democrats have hit the surface — Ocasio-Cortez may soon find herself outcast from the party.

That will hurt come election time.