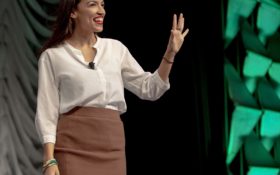 This time, the socialist leader ran afoul of the law during a jogging fundraiser.

What she didn’t seem to tell people was that it was actually a fundraiser for Ocasio-Cortez’ re-election!

People paid $30 apiece, or $20 for kids, to run in Astoria Park in Queens the weekend after Earth Day.

Some 400 people showed up, and the democratic socialist’s campaign made off with a haul of $11,000.

The real outrage is that some participants had absolutely no idea that they were building up Ocasio-Cortez’ campaign war chest.

Clueless joggers thought their donations went “to help the environment, to support the Green New Deal” or “to help raise awareness and educate people,” according to The New York Post.

It looks like they should have read the fine print.

At the very bottom of the website, after scrolling for four screens, her campaign posted a notice: “Registration fees are contributions to AOC for Congress, and have the general contribution rules.”

When they found out, some of the people felt like they’d been fleeced… and they were hopping mad.

“The site says it’s to benefit her environmental plan,” one man complained. “If it is going to go directly to her campaign they should have said so.”

It’s obvious that a lot of the environmentally-conscious runners had no idea their money went straight to Cortez’s coffers … and she wasn’t telling them.

“We’re getting together for our own health, for our planet’s health … and to fight for the Green New Deal together,” the congresswoman said around 9 a.m. on April 27.

When a reporter from The Post asked Cortez point blank if “that was a little bit misleading,” she decided that was a good time to run…in the other direction!

The problem isn’t just the sleazy, deceptive way Cortez get its mitts on some cold cash—it’s that they may have committed a crime.

A lot of the people brought minor children, who donated $20 apiece.

Federal election law says that children can make contributions—but the “decision to contribute “has to be “made knowingly and voluntarily by the minor.”

It’s important the money, and the choice, is “not in any way controlled by another individual.”

If the parents didn’t know it was a fundraiser, and were donating money in their kid’s names, then Ocasio-Cortez broke the law.

So why risk it? There could be a few reasons Cortez tried to keep quiet about where the cash went.

The Bronx Democrat has seen her popularity tank in her safe-Democrat congressional district after she chased tens of thousands of good paying jobs out of town. In fact, she’s become so unpopular that the GOP has already recruited a long-shot candidate to run against her.

If she wanted to boost those numbers, though, she still fizzled: Only 198 of the people who showed up in Astoria came from her district.

Then there’s the question of where those funds are going. They might just benefit her live-in boyfriend, just like they did last election.

That’s part of an enormous scandal that saw Ocasio-Cortez and her campaign manager shuffle  “at least $885,735” of donor funds around without legal scrutiny, according to a complaint filed with the FEC on March 4 by the National Legal and Policy Center.

That’s a pretty steep fall for the woman DNC Chair Tom Perez called “the future of the Democratic Party” just a few months ago.

If the NLPC has its way, AOC’s future will involve a lot of time inside a courtroom.

She can run, but she can’t hide.