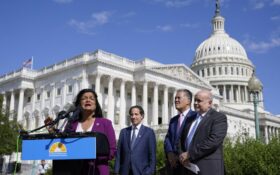 Pramila Jayapal, the chair of the Congressional Progressive Caucus (CPC), took herself out of the running Friday for Democratic leadership in the next Congress by announcing a bid for a second term to lead one of the largest groups of lawmakers in the party.

In a letter to her progressive colleagues, Jayapal, of Washington, noted the series of achievements the caucus had during her tenure as chair. She also acknowledged the challenges House Democrats face as they become the minority party in January.

Jayapal’s tenure as CPC chair began when President Joe Biden — whom she has dubbed the most progressive president in history — came to office.

“The next two years are going to be about being an opposition party, which I am extremely good at because I fought on immigrant rights and I came in 2016 when (Donald) Trump was elected,” she added.

Jayapal, who became the first Indian American woman elected to the House, spent the last few months exploring a run for a senior leadership post after the midterm elections, as Speaker Nancy Pelosi and much of her team were expected to step down and make way for new leaders.

That happened Thursday when the 82-year-old Pelosi took to the House floor to announce that she will be stepping aside after leading the party for nearly two decades.

Jeffries, a member of the Progressive Caucus, could make history as the nation’s first Black speaker of the House if Democrats regain control of Congress in the future.

Jayapal said that it was only in the last few weeks that she made her own decision not to pursue a leadership post.

In October, Jayapal retracted a letter from the caucus that had urged Biden to engage in direct diplomatic talks with Russia over its invasion of Ukraine. The letter generated intense blowback, exposed Democratic divisions and left some questioning if Jayapal is prepared for leadership.

She denied the letter as being one of the factors for her decision.

Instead, Jayapal said it was the work the caucus had done over the past two years that inspired her to run for chair again, this time to lead the largest number of progressive members in the group’s history, including the more than a dozen new members of the group elected to Congress this month.

If Jefferies announces his run for minority leader when Congress comes back after the Thanksgiving break, Jayapal said, there are a number of things she would ask of him and his leadership team before pledging the progressive group’s support.

“I do want to sit down with him,” Jayapal said, “just to make sure we’re talking through the role of the CPC as it relates to the leader.”