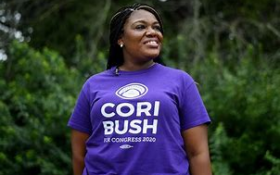 One member “The Squad,” a group of far-left lawmakers, is coming under figurative fire… for her claim about being under actual fire.

U.S. Rep. Cori Bush (D-Mo.) said she was shot at by white supremacists in Ferguson, Missouri, amid the 2014 riots that followed the fatal shooting of Michael Brown by police.

Now critics are saying she embellished the tale.

“When we marched in Ferguson, white supremacists would hide behind a hill near where Michael Brown Jr. was murdered and shoot at us,” Bush tweeted. “They never faced consequences.”

At least one person backed up Bush on social media.

“I vividly remember hiding under porches in Canfield as shots were fired at us,” Ohun Ashe wrote in response on Twitter. “No one came to help us. Ferguson police would be nearby. We would come from under porches using cars as shields in between gun shots to make it out.”

Bush used that anecdote to insist that the not-guilty verdict for Kyle Rittenhouse would essentially be a message to the white supremacists who shot at her.

“If Kyle Rittenhouse gets acquitted, it tells them that even 7 years later they still can get away with it,” she wrote.

There’s one problem with Bush’s story: No one can verify it.

The St. Louis Post-Dispatch asked police whether there’s any record of such an incident from the unrest.

“None that I’m aware of,” Ferguson Police Chief Frank McCall Jr. told them.

Bush stands by her story.

“While on the frontlines of the Ferguson Uprising, Congresswoman Bush and other activists were shot at by white supremacist vigilantes,” a campaign spokesperson told the newspaper. “The question we need to ask is why white supremacists feel empowered to open-carry rifles, incite violence, and put Black lives at risk across our country.”
But others say that if it happened, there should be some record of it, somewhere, including in the media accounts.

Townhall columnist Larry O’Connor doubted that the liberal media would pass up a story about white supremacists at the Ferguson riots. He tweeted:

I could be wrong… But I'm pretty sure there were plenty of sympathetic reporters covering the Ferguson marches. I'd think if "white supremacists" were taking pot shots at protesters it might have made the news. https://t.co/FmRIZdwMKH

Even the website Snopes, a liberal-sympathizing “fact-checker,” lists Bush’s claim as “unproven.” The website reports “significant skepticism about its veracity.”

Snopes notes that there was a report of shots fired at an apartment complex on Jan. 19, 2015, at a location that could match the description in Bush’s tweet – but they were fired at a vehicle belonging to Ayanna Delaine Barney.

It’s not clear who fired the shots, why they were fired, or whether Bush was even there.

“Barney told Snopes she never saw any shooter, in part because it was dark out at the time of the incident,” the website reported. “She also said she had no recollection of Bush’s having been present during the events in question.”

According to Snopes, some believe the shots were fired as part of a feud that had broken out among factions of protesters rather than white supremacists.

“We have found no evidence to support that hypothesis, but it does indicate that Bush’s white supremacists claim was not universally accepted among those present at the incident on Jan. 19, 2015,” Snopes said.

Bush shot to local prominence during the Ferguson unrest, which she used to launch her political career.

She lost a 2016 bid for the Democratic nomination in the U.S. Senate race. Then in 2018, she attempted to primary Rep. Lacy Clay, a fellow Democrat. She failed, but she tried again in 2020 and succeeded in toppling the 10-term lawmaker. She won the general election later that year in her heavily Democratic district.

Once in Washington, she quickly aligned herself with the far-left group of progressives known as “The Squad,” which now consists of Reps. Alexandria Ocasio-Cortez (D-N.Y.), Ilhan Omar (D-Minn.), Ayanna Pressley (D-Mass.), Rashida Tlaib (D-Mich.) and Jamaal Bowman (D-N.Y.) in addition to Bush.