Obama's secret war INSIDE the Trump administration - The Horn News 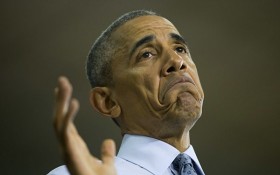 Before he left office, Barack Obama tried to sabotage Donald Trump’s presidency by putting his own people into lifetime government jobs as “civilian” employees – where they could wreck Trump’s policies, leak phony transcripts, and provide anonymous tips to the media from “inside the administration.” And he regularly broke the law in the process, according to a shocking new report.

Each president appoints thousands of political cronies to posts in government agencies – and when the president leaves, his people do, too.

But dozens of Obama political appointees wormed their way into the permanent bureaucracy, camouflaged as “civilians.”

It’s calling “burrowing” – when political appointees ask to be reclassified as non-partisan, civil service employees…imagine Eric Holder pretending to be no more political than the postman.

99 of Obama’s political appointees tried to get reclassified as regular government workers so they could stay behind to fight against Trump’s America First agenda.

A total of 78 requests were approved between 2010 and March 2016, according to a Government Accountability Office report.

Obama attempted to stack the most sensitive areas of the national government with his toadies, the GAO reports.

The highest number of “conversions” was in the Department of Homeland Security – the agency that spies on Americans, classifies “right-wing” gun owners as terrorists, and oversees immigration policy.

That may explain why President Trump had more national security leaks during his first 126 days in office than in the previous two administrations combined.

Trump has also had officials defy his orders and leak embarrassing tall tales to the mainstream media.

Besides DHS, numerous Obama appointees also infiltrated the departments of Justice, Treasury, Commerce, HHS, Agriculture, and the FDIC, which deals with policy toward bankers.

But that’s only the tip of the iceberg: One out of every four of these appointees broke the law on their way into office, the government watchdog reveals.

When a political appointee wants to stay in his cushy government job, he has to get permission from the Office of Personnel Management (OPM).

17 Obama appointees didn’t bother to ask OPM for approval, as required by law – almost quarter of the total!

For instance, nine of the illegal appointees tried to burrow into the Office of Special Counsel, the “independent” lawyers who investigate the Trump administration.

Yes, Obama appointees tried to set themselves up to prosecute the Donald Trump in court.

Some Republicans saw this coming. Gov. Chris Christie explained last year that Obama was trying to take his liberal yes-men “from the political appointee side into the civil service side, in order to try to set up … roadblocks for your successor.” He compared it to when “all the Clinton people took all the Ws off the keyboard when George Bush was coming into the White House.”

158 Clinton administration officials “burrowed” during his two terms – 47 during his last year in office.

135 Bush appointees did the same thing by 2008….and only 7 of them raised any ethical issues, according to a previous GAO report.

Still, that was too much for Democrats. In July 2008, Sen. Chuck Schumer considered introducing a law to make “burrowing” illegally a misdemeanor.

“It sticks in many people’s craw that these horrible things were done, and simply because you resign from the department, you escape without punishment,” Schumer said at the time.

But he never introduced a bill.

Instead, the American people get stuck paying the bill – to the tune of millions of dollars each year – for illegal political cronies.

“Assuming an average government salary of $75,000, the government is paying over $4.5 million in salaries each year to civil servants who acquired their jobs illegally,” an analysis from 2010 discovered. Even that assumes politicos make an average salary and “does not account for each government employee receiving top-notch health care, subsidized vision and dental care plans, subsidized life insurance, up to $60,000 in educational debt relief, and yearly benefits after retirement.”

But even that number hardly scratches the surface of Obama putting his foot soldiers into the darkest pockets of the Deep State.

The GAO report on Obama appointees inspects only 30 federal agencies.

The total number of government agencies could be as much as 1,433 percent higher than the ones the GAO covered.

It’s time somebody paid for liberals trying to subvert democracy, other than the taxpayer.