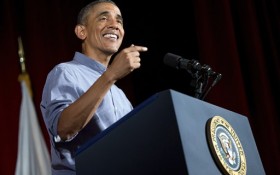 President Barack Obama found no help for his hugely expensive plan for two years of free community college in a Republican controlled Congress.  Obama’s original plan’s cost, $60 billion, was so high that it wasn’t even considered by Congressional leaders.

So now Obama is now putting pressure on state and local leaders to provide what he’s been unable to offer nationally.

Obama is teaming up with Jill Biden, the wife of the vice president and a community college teacher, to visit Macomb County Community College in Warren, Michigan, on Thursday. They planned to announce a College Promise Advisory Board, led by Biden, that will try to recruit more states and communities to provide free community college…. on the taxpayer dime.

Conceding a lack of interest in that plan from the Republican-controlled Congress, domestic policy adviser Cecilia Munoz said the advisory board will try to build momentum for the idea outside of Congress’ support.

Obama also was announcing $175 million in Labor Department grants to help create 34,000 apprenticeships around the country.