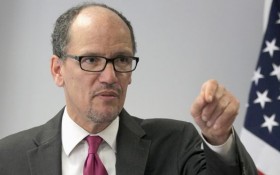 Despite a federal ruling that they’re impermissible, Perez remains defiantly supportive of college athlete unions and says the question of allowing the formation of these unions “remains open.”

Perez told MSNBC there remains a key question about how workers “have a voice in the workplace.”

Perez calls resolving questions in the favor of unions is part of government’s “unfinished business.”

The National Labor Relations Board on Monday dismissed a NLRB regional director’s 2014 ruling involving an organizing attempt at Northwestern University of student athletes. The board concluded that having both union and nonunion teams could lead to different standards at different schools and create competitive imbalances throughout college sports.