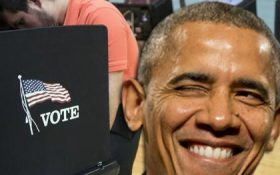 The Democrats have a new rule for anyone who wants to be their party’s presidential nominee in 2020: You have to be a loser.

Polls show the most exciting candidates with the greatest appeal to the Democratic base are candidates who have lost presidential primaries before, or who have never won a major election to begin with. Obama even met with two radical left-wing candidates who lost — and encouraged them to run in 2020.

Could his formal endorsement be coming next?

First, the former president has met with Beto O’Rourke, the Democrats’ candidate for senator in Texas against Republican Ted Cruz.

The media told us that O’Rourke had it all—good looks, charisma, rabid leftist political views, a phony Hispanic name.

And money… lots and lots of money.

O’Rourke raised hundreds of millions of dollars—more than any other U.S. Senate candidate in history—and the media treated him like a golden god for months. He still lost to Ted Cruz.

Barack Obama secretly met with Beto (whose real name is Robert) in the former president’s Washington, D.C., offices in November to talk about him running for president in a few months.

Obama emerged from the meeting calling O’Rourke an “impressive young man” who “ran a terrific race”— while losing millions of dollars with nothing to show.

All through his Senate race, O’Rourke denied he was interested in running for Senate as a stepping stone to the presidency. But now, he admits he wants the top job, and he was all ears with Obama.

The ex-president didn’t stop with just one candidate, though — he sounded out a second Democratic loser about being his party’s standard bearer in 2020.

Andrew Gillum ran for governor of Florida in 2018. Despite a dirty campaign, including a recount that saw election officials mysteriously “finding” boxes of uncounted votes, Gillum finally lost to Republican Rick Scott.

But Gillum ran as a socialist—and that caught Obama’s eye. So, Obama met Gillum in early December to give him some pointers about running for president.

Gillum hasn’t said whether he’s interested in following the president’s advice. “I plan on being married to my wife,” Gillum said. “That is all I am planning.”

But he promised to do “everything I can to make the state of Florida available and winnable for the Democratic nominee for president.”

If Obama were the only politician so interested in seeing losing candidates become presidential nominees, we might write it off…but the whole Democratic Party has decided losing is the new winning, as long as the loser is a borderline Communist.

A more recent poll that asked Democrats to pick their favorite 2020 presidential candidate. The winners, in order, were: Joe Biden, Bernie Sanders, Hillary Clinton, and O’Rourke.

Biden ran for the Democratic presidential nomination twice—in 1988 and 2008. And he lost both times.

Sanders lost to Hillary Clinton in 2016, although secret e-mails uncovered by WikiLeaks show the Democratic National Committee conspired to rig the primaries for Crooked Hillary.

Clinton lost the nomination in 2008 and the presidency in 2016, even with spies embedded in Donald Trump’s campaign.

The only election winner in the poll was Senator Elizabeth Warren, the fifth-place finisher, who lost her bet against Donald Trump when her DNA test backfired spectacularly.

Even the Midwest grassroots has been struck with loser-mania. An Iowa Democratic hack even told the media that Beto is “in the top tier for sure” in the 2020 Iowa caucuses.

What do these candidates have in common? Three things.

First of all, they’re extreme left-wingers. Sanders is a socialist, Gillum and O’Rourke ran on the far-Left, and Hillary Clinton is as extreme as they come.

Second of all, their politics are so radical that they can’t even get their own party’s support nationally. Or, like Gillum, they can’t win in a swing state like Florida.

Obama, it seems, wants to take his party to the extreme left. Obama’s paving the way for the day when Democrats come back into power so that—on day one—abortion, gun control, open borders, and socialized medicine all get shoved down your throat forever.

Third, well, they’re losers. The Democrats have a soft spot for someone has never had to do anything productive—who just made speeches and empty promises. That’s all Obama did for eight years in office, after all — and the media covered up his miserable record. The Democrats think this is a winning model.

If the Democrats invest in one of these far-Left losers, Republicans had better make sure their candidate is someone with a track record of winning, somebody who got results in the private sector and in office.

If conservatives don’t stick with a proven winner and give him all they’ve got in 2020, the whole country will be lost—Obama’s making sure of it.