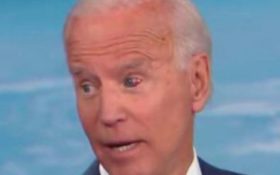 And it’s only getting worse.

“He’s not a healthy guy,” Dr. David Scheiner, Obama’s personal physician for 22 years, told The Washington Examiner. “He’s not in bad shape for his age, but I wouldn’t say he’s in outstanding health. Could I guarantee he won’t have issues for the next four years? He has a lot of issues that are just sort of sitting there.”

Scheiner also said the records that Biden’s campaign released are incomplete. It excludes reports from an MRI on Biden; the former V.P. has had brain aneurysms thirty years ago that almost killed him.

“I had no idea Biden had such a history. My goodness gracious, he’s got a lot of history,” Scheiner said.

If elected, the then-78-year-old Biden would be the oldest president in American history to be inaugurated.

This isn’t the first health concern to pop-up during the 2016 Democratic campaign.

Biden’s eye filled with blood during a CNN Town Hall on climate change in September.

Uh, hey guys. Joe Biden’s eye filled with blood while onstage at the CNN town hall.
This is not a photoshop: pic.twitter.com/kJRHxMP8wc

And Biden’s top challenger for the 2020 Democratic nod, 78-year-old Sen. Bernie Sanders, I-V.T., suffered a heart attack in October and had to be rushed to the hospital.

Sanders underwent emergency heart surgery and had two stints implanted, his campaign said in a press release at the time.

Should Biden release his full health history? Or is it no one’s business?