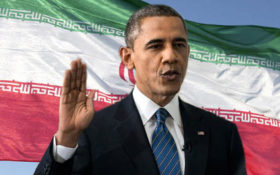 Even worse, the silence from the mainstream media on the biggest scandal to ever hit the Obama administration is deafening — and it has conservatives outraged.

Obama sold out America, and did it to get a toothless and ugly deal with Iran that experts believe hasn’t stopped the Ayatollah from pursuing nuclear weapons.

Republicans in Congress are already vowing an investigation into the report detailed in Politico, which alleges that the Obama Administration blocked the Justice Department from acting against the Iran-sponsored terror group Hezbollah.

The report alleges that Hezbollah formed a vast international criminal network, linking up with South American drug cartels to send cocaine into the streets of America and launder the cash through used-car dealerships right here in the United States.

In other words, money from coke sold to a desperate addict on the streets of New York, Detroit or Los Angeles is being used DIRECTLY to fund terrorist operations, including attacks on our allies and even attacks on U.S. forces in Iraq.

This wasn’t just some vague chatter that investigators were trying to follow-up on.

Investigators in what was known as Project Cassandra were hot on the tail of the criminals and terrorists, even tracking individual couriers toting suitcases containing MILLIONS in cash to enrich South American drug cartels and Iranian terrorists, according to Politico.

They had names, locations, dates, dollar amounts and more.

They even ID’ed suspects in custody in other countries as targets for extradition.

But as Obama and John Kerry worked on the deal with Iran, investigators were ordered to back off.

One of the biggest fish of all… a Hezbollah-linked arms dealer arrested in the Czech Republic… was allowed to slip away when the U.S. refused to push for his extradition.

“The closer we got to the [Iran deal], the more these activities went away,” David Asher, an official in the Defense Department at the time, told Politico. “So much of the capability, whether it was special operations, whether it was law enforcement, whether it was [Treasury] designations — even the capacity, the personnel assigned to this mission — it was assiduously drained, almost to the last drop, by the end of the Obama administration.”

Another source, who was not named, went even further.

Obama and Kerry… or at least those operating directly beneath them… were actually ORDERED BY IRAN to back off.

“During the negotiations, early on, [the Iranians] said listen, we need you to lay off Hezbollah, to tamp down the pressure on them, and the Obama administration acquiesced to that request,” a former CIA officer told the website. “It was a strategic decision to show good faith toward the Iranians in terms of reaching an agreement.”

Yes, they wanted to show “good faith” to a terrorist group with a long and bloody history of murdering innocent civilians.

Katherine Bauer, an Treasury Department official in the Obama administration, said in written testimony to Congress that investigations related to Hezbollah were “tamped down” because the feds were afraid of “rocking the boat with Iran and jeopardizing the nuclear deal.”

To some extent it worked; Obama got his infamously bad deal with Iran, with his fawning media hailing him as some master negotiator.

But as we know now, not only was it a bad deal… but it was paid for with drug money and American lives.

Unsurprisingly, CNN would rather talk about how many diet cokes President Donald Trump drinks everyday than a real story.