Obama stunned the crowd on Monday when he said… (he MUST be joking!) - The Horn News 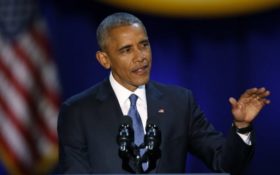 But Obama didn’t tell the crowd much about Rosen’s policies.

Instead, the former president spent almost the entire speech telling the crowd about his glowing opinion of himself.

Appearing at the University of Nevada’s Cox Pavilion, Obama referred to himself 92 times during his 38-minute speech.

That means he mentioned himself once every 25 seconds… for nearly 40 minutes. The number stunned even Obama’s harshest critics.

Only 2,000 people attended the rally. Cox Pavilion fits between 2,154 and 3,286 people, according to Fox News, which means the pro-Obama crowd was dwarfed by President Donald Trump’s rally in Nevada just two days prior.

8,500 Trump supporters came out to hear the president on Saturday in the northeast of the state. In other words, Trump drew approximately four times as many supporters… in a much smaller town.

“You guys go ahead and take a seat, I got a lot to say,” Obama told his smaller crowd Monday.

“This is the most important election I can remember in my lifetime, and that includes when I was on the ballot,” Obama told the crowd.

For once, he wasn’t wrong.

That’s a lot of Obama.

Who is a better president: Donald Trump or Barack Obama?