Obama returns to the White House for this - The Horn News 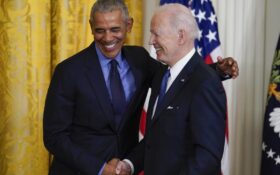 Since leaving office in 2017, former President Barack Obama has returned to the White House only once, to celebrate the 12th anniversary of Obamacare in April. Meanwhile, former First Lady Michelle Obama has stayed away from the White House entirely.

President Joe Biden and his wife, Jill, are set to invite them back Wednesday in order to unveil their White House portraits.

It’s been more than a decade since the Obamas welcomed back George W. Bush and his wife, Laura, for the unveiling of their White House portraits, as part of a beloved Washington tradition.

The tradition transcended partisan divisions for most of American history, but it went on pause recently.

The Obamas family’s portraits were not unveiled during the Trump administration, but it remains unclear why.

Two spokespeople for Trump did not respond to the Associated Press’s emailed requests for comment on the lack of a ceremony for Obama, and whether artists are working on portraits of Trump and former first lady Melania Trump.

Possibilities include pandemic disruptions, Obama’s lack of interest or Trump’s hostility to Washington.

Take a look at the most recent portraits —

The White House has rehung presidential portraits of George W. Bush & Bill Clinton after they were removed during the Trump admin.
They are back on display in the Grand Foyer of the executive mansion. pic.twitter.com/YZIBtovAMw

Portrait ceremonies often give past presidents an opportunity to showcase their comedic timing.

“I am pleased that my portrait brings an interesting symmetry to the White House collection. It now starts and ends with a George W,” Bush quipped at his ceremony in 2012.

Bill Clinton joked in 2004 that “most of the time, till you get your picture hung like this, the only artists that draw you are cartoonists.”

Obama can be expected to launch into a lecture, if his past speeches are any indication.

Recent tradition, no matter the party affiliation, has had the current president genially hosting his immediate predecessor for the unveiling — as Clinton did for George H.W. Bush, George W. Bush did for Clinton and Obama did for the younger Bush.

Other portraits of early presidents and first ladies often came to the White House as gifts. Since the 1960s, the White House Historical Association has paid for most of the paintings.

The first portraits financed by the association were of Lyndon Johnson and Lady Bird Johnson, and John F. Kennedy and Jacqueline Kennedy, said Stewart McLaurin, president of the private, nonprofit organization established by first lady Kennedy.

Before presidents and first ladies leave office, the association explains the portrait process. The former president and first lady choose the artist or artists, and offer guidance on how they want to be portrayed.

“It really involves how that president and first lady see themselves,” McLaurin said in an interview with The Associated Press.

The collection includes an iconic, full-length portrait of Washington that adorns the East Room. It is the only item still in the White House that was in the executive mansion in November 1800 when John Adams and Abigail Adams became the first president and first lady to live in the White House.

Years later, first lady Dolley Madison saved Gilbert Stuart’s portrait of Washington from almost certain ruin. She had White House staff take it out of the city before advancing British forces burned the mansion in 1814. The painting was held in storage until the White House was rebuilt.

President and first lady portraits are seen by millions of White House visitors, though not all are on display. Some are undergoing conservation or are in storage.

Those that are on display line hallways and rooms in public areas of the mansion, such as the Ground Floor and its Vermeil and China Rooms, and the State Floor one level above, which has the famous Green, Blue and Red Rooms, the East Room and State Dining Room.

The State Floor hallway one floor above features recent presidents: John F. Kennedy, Lyndon B. Johnson, Jimmy Carter, Ronald Reagan and George H.W. Bush. Gerald Ford’s portrait and the likeness of Richard Nixon — the only president to resign from office — are on view on the Grand Staircase leading to the private living quarters on the second floor.

Past presidents’ images move around the White House, depending on their standing with the current occupants. Ronald Reagan, for example, moved Thomas Jefferson and Harry S. Truman out of the Cabinet Room and swapped in Dwight Eisenhower and Calvin Coolidge.

In the Clinton era, portraits of Richard Nixon and Reagan, idols of the Republican Party, lost their showcase spot in the Grand Foyer and were replaced with pictures of Franklin D. Roosevelt and Truman, heroes of the Democrats. Nancy Reagan temporarily moved Eleanor Roosevelt to a place of prominence in the East Room in 1984 to mark the centennial of her birth.

One of the most prominent spots for a portrait is above the mantle in the State Dining Room and it has been occupied for decades by a painting of a seated Abraham Lincoln, hand supporting his chin. It was placed there by Franklin Roosevelt.

Clinton’s would be relocated to make room for Barack Obama’s if the White House sticks to tradition and keeps the two most recent Oval Office occupants there, McLaurin said.

“That’s up to the White House, to the curators,” he said.

The association, which is funded through private donations and the sale of books and an annual White House Christmas ornament, keeps the portrait price well below market value because of the “extraordinary honor” an artist derives from having “their work of art hanging perpetually in the White House,” McLaurin said.

Details about the Obamas’ portraits will stay under wraps until Wednesday.

Biden will be the rare president to host a former boss for the unveiling; he was Obama’s vice president. George H.W. Bush, who held Ronald Reagan’s ceremony, was Reagan’s No. 2.

Betty Monkman, a former White House curator, said during a 2017 podcast for the White House Historical Association that the ceremony is a “statement of generosity” by the president and first lady. “It’s a very warm, lovely moment.”

Linda St. Thomas, chief spokesperson for the Smithsonian Institution, said in an email that a $650,000 donation in July from Save America, Trump’s political action committee, was earmarked for the couple’s museum portraits. Two artists have been commissioned, one for each painting, and work has begun, St. Thomas said.