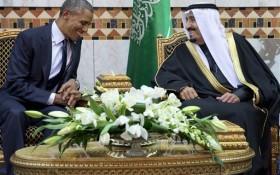 Friday, the Obama administration greeted King Salman of Saudi Arabia with assurances that the Iran nuclear deal comes with the necessary resources to help check the Islamic Republic’s regional ambitions.

The Saudi king is making his first visit to the White House since ascending the throne in January and Friday’s talks with President Barack Obama come at an important moment. Congress will soon take up a resolution of disapproval of the nuclear agreement, though Senate Democrats have gathered enough votes to prevent to prevent the Republican-led measure’s success.

The accord will provide Iran hundreds of billions of dollars in relief from international sanctions in exchange for a decade of constraints on the country’s nuclear program. Saudi officials have cautiously supported the deal, but are worried about enforcement and whether an Iranian government flush with cash will wreak havoc throughout the Middle East.

Four years after Obama demanded that Syrian President Bashar Assad step down, he remains in power through significant help from Iran. The U.S. has largely abandoned efforts to uproot the Iranian-backed militia Hezbollah from its dominant position in Lebanon. Washington has struggled to limit Tehran’s influence in Shiite-dominated Iraq. And U.S. support for a Saudi-led military intervention has done little to reverse the Iranian-assisted Houthis’ hold over much of Yemen.

Salman’s visit is pushing the administration to publicly address these concerns before Congress votes.

Elliott Abrams, who was deputy national security adviser to President George W. Bush, said Obama was skeptical about Salman’s interest in security promises. Since Obama has a little more than a year left in office, he said, those “have a very short life.”

Salman, Abrams said, “wants to tell the president that Iran is a great danger and an enemy.”

“The Saudis think we view Iran as a possible partner,” he added. “They don’t.”