Obama wakes up to VERY bad legal news (arrest him!) - The Horn News 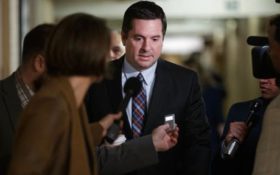 The noose is tightening on corrupt Obama administration officials – and maybe the former President Barack Obama himself – for using a fake dossier to spy on President Donald Trump’s presidential campaign.

The Republicans have taken a huge step bringing us closer to knowing the truth about that phony intelligence document – and it could land a wide circle of Democrats in jail.

House Intelligence Committee Chairman Devin Nunes demanded on Tuesday that two dozen Obama intelligence officials answer a series of probing questions designed to get the facts on the table and punish the guilty.

Nunes has switched into Phase Two of his three-pronged investigation into the Obama administration. He wants to know how Obama’s intelligence apparatus abused Christopher Steele’s dossier to obtain a FISA warrant and wiretap the Trump campaign.

That warrant was renewed again and again, allowing the Obama administration to eavesdrop on Trump’s presidential campaign for almost the entire election – without Trump ever knowing it.

Nunes, a California Republican, is known for writing a memo detailing how the Democratic Party and former Secretary of State Hillary Clinton’s campaign funded the entire effort; how Obama officials duped a FISA judge into thinking they had the goods on Trump; and how they listened in on a Trump campaign official month-after-month.

When did Obama officials find out that the DNC and the Clinton campaign funded this dossier, which claimed Russian interference on Trump’s part?

Who acted as a conduit of this disinformation?

Once they were deceived, did they pass this misinformation on to anyone else?

Did they use fraudulent opposition research to take any kind of legal action against Trump, or anyone else?

Nunes warned the officials that he is not playing softball when it comes to defending Americans’ rights to privacy against the surveillance state.

He’s willing to haul everyone who got a letter into court, if necessary, to get the truth.

“If you do not provide timely answers on a voluntary basis, the Committee will initiate compulsory process,” Nunes warned.

That means slapping dozens of former Obama administration officials with subpoenas – and grilling them under oath.

The people who received his letter include former FBI Director Jim Comey and Obama’s CIA Director John Brennan. That’s just one step away from the former president himself.

Brennan’s already in hot water for lying to Congress. He told Trey Gowdy last May that he had no idea who authored the dossier – and that it was “not in any way used as a basis” for the CIA’s investigation of Russian collusion in the Trump campaign.

But Brennan may not be the highest-ranking official the Nunes investigation ends up putting in a courtroom, or locking in a cell.

One of the 12 questions Nunes asks the officials specifically questions if Obama was involved in the effort to abuse the FISA process.

“Was President Obama briefed on any information contained in the dossier prior to January 5, 2017?” Nunes asked.

The answer could make Obama the first president to go to prison for abusing the constitutional rights of another president.