Obama is FINISHED if this video spreads... - The Horn News 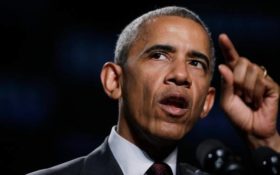 The 2020 presidential election is heating up, and President Donald Trump just got a major boost… from former President Barack Obama.

Obama made a head-spinning statement that America needs to get contol of its borders immediately, and the whole thing was caught on video.

“I think what we have to do is to come together and say, we’re going to strengthen our borders,” Obama said at a town hall meeting in Costa Mesa, California, the most liberal state in the country… on March 18, 2009.

Then Obama, who had only been in office two months at the time, laid out an immigration plan based on American values.

“I’m going to be going to Mexico… to figure out how do we get control over the border that’s become more violent because of the drug trade,” he said.

Obama’s voice started to boom as he pretended to get in the faces of illegal aliens — or “undocumented workers,” as he calls them.

“Look, you’ve broken the law! You didn’t come here the way you were supposed to, so this is not going to be a free ride,” he said.

He wrapped up by praising legal immigrants who came into the country the right way.

He told illegals, “You are going to go to the back of the line so that you don’t get ahead of somebody who was in Mexico City applying legally.”

Then Obama did something that will really help Trump—and sink any 2020 presidential candidate who wants amnesty: He gave an exact number of how many illlegal immigrants a year is too many.

“I think the American people, they appreciate and believe in immigration. But they can’t have a situation where you just have half a million people pouring over the border without any kind of mechanism to control it,” Obama said.

Half a million illegals? Those were the days!

More than 500,000 illegal immigrants have already poured over the border so far in 2019… and it’s only halfway over.

Former DHS Secretary Kirstjen Nielsen told Congress that 900,000 illegals will cross the border this year alone… but that number could be even higher. America is on track to admit 1.5 million illegals in 2019, according to some estimates.

Add to that another half-million illegals who cross the border without the Border Patrol ever knowing it, according to researcher Stephen Kopits.

Then, up to 400,000 “temporary” visitors will overstay their visas this year, according to Center for Immigration Studies Director of Policy Jessica Vaughan.

Add it up, and that’s more than three times as many as Obama said is too many.

When Democratic candidates for president like Joe Biden, Bernie Sanders, and Kamala Harris—or congressional leaders Nancy Pelosi and Chuck Schumer—say the border is a “manufactured crisis,” expect Republicans to throw Obama’s words in their face.

The impact of Obama’s video on the 2020 races could be explosive.

Americans already say the two most important problems facing the country are “the government” and immigration, according to a Gallup poll from last week.

Immigration has been America’s number one issue since at least last July.

That’s great news for Trump’s re-election, and the polls prove it.

With the Russia probe falling apart and border concerns rising, Trump is rising — and he’s leaving his Democratic rivals in the dust.

How big has Trump’s surge been?

In 2017 Public Policy Polling found that Donald Trump would be beaten by five Democratic candidates.

Biden and Sanders would have beaten Trump, but so would Senators Elizabeth Warren, Cory Booker—and even disgraced groper Al Franken!

But the latest poll from Florida Atlantic University shows how things have changed.

Imagine if a video came out of Biden’s former boss agreeing with Trump about the most important issue of the 2020 election.