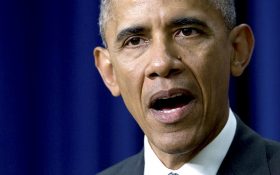 After President Donald Trump announced his plan to rescind the executive order that put Deferred Action for Childhood Arrivals (DACA) program into place, liberals lost it.

He was called everything from racist to inhumane… but the president’s critics are forgetting one major thing.

A video that shows former President Barack Obama promising America the program would be temporary!

When Obama first announced his executive action to put the program in place in 2012, he referred to it as “temporary relief.”

“In the next few months, eligible individuals who do not present a risk to national security or public safety will be able to request temporary relief from deportation proceedings and apply for work authorization. Let’s be clear: This is not amnesty, this is not immunity, this is not a path to citizenship, this is not a permanent fix.”

He continued, “This is a temporary stop-gap measure that lets us focus our resources wisely while giving a degree of relief and hope to talented, driven, and patriotic young people.”

So while he said temporary twice, and clearly stated this was not meant to be permanent, liberals are still losing it.

GQ correspondent Keith Olbermann called out all Trump supporters in a tweet, saying, “After DACA not only is Trump a racist, but anyone who supports him and isn’t a racist, is far worse.”

But they obviously forgot Obama’s promised America five years ago that DACA was always intended to be “temporary.”

Trump, it seems, doesn’t just deliver on his promises… he delivers on Obama’s broken promises as well.

That must drive liberals crazy.

See the speech for yourself below.