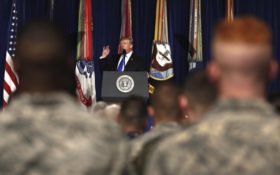 President Donald Trump took a stand Tuesday, casting a shadow on Obama and his failure to honor the families of fallen soldiers.

Trump made it clear that he has put forth every effort to actively acknowledge the death of every single American soldier.

“To the best of my knowledge, I think I’ve called every family of somebody that’s died, and it’s the hardest call to make,” he said — and slammed former presidents who did not place such calls.

The controversial claim sent the mainstream media into a frenzy — and Trump was quick to defend his statements.

During an interview with Fox News Radio, Trump asked,“You could ask General Kelly, did you get a call from Obama? You could ask other people. I don’t know what Obama’s policy was.”

He was referring to Gen. John Kelly, Trump’s White House Chief of Staff. Kelly’s son, Robert, a Marine Second Lieutenant, was killed in action in Afghanistan in 2010 during former President Barack Obama’s administration.

Gen. Kelly was the highest-ranking military official to lose his child during the Iraq or Afghanistan wars — and even he was snubbed by Obama. According to a White House official, Gen. Kelly never received a call of condolences from Obama after his son laid down his life for our country.

Trump first addressed this matter Monday during a press conference, when he was asked as to whether he planned on reaching out to the families of the four soldiers killed in Niger.

The U.S. soldiers died two weeks ago when militants, who are thought to be loyal to the Islamic State group, ambushed their convoy while on patrol with Nigerien troops.

Trump acknowledged that he had already made plans to reach out to all for families, “I actually wrote letters individually to the soldiers we’re talking about, and they’re going to be going out either today or tomorrow.”

He even went the extra step to explain that he was going to call the families as well — and followed through.

White House Press Secretary Sarah Sanders said the president offered his condolences and told them “their family’s extraordinary sacrifice to the country will never be forgotten,” according to Fox News.

It is a special honor for families to personally receive a call from the president, and Trump understands that there are many ways to console the families.

Kellyanne Conway, a senior White House adviser, explained Tuesday that Trump doesn’t always make public when he is  comforting them “because these are very private, very solemn — sacrosanct really — moments.”

What is clear is the our president cares about our soldiers.

SHOCKER: Video from Hillary’s past could land her in jail [Sponsored]