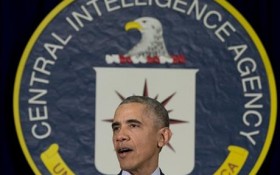 President Barack Obama claimed progress Wednesday in the U.S.-led fight against the Islamic State group, even as political turmoil in Iraq and renewed violence in Syria threatened to jeopardize hard-fought gains.

During a rare presidential visit to CIA headquarters, Obama said it had been “a bad few months” for the Islamic State and gave a detailed account of areas where U.S.-backed forces have wrested territory back from the extremist group. Though he acknowledged the fight remains difficult and complex, he said IS was on the defensive and that the U.S. intends to “keep that momentum.”

“Every day, ISIL leaders wake up and understand that it could be their last,” Obama said, using an acronym for the extremist group.

Obama offered no new steps or specifics about how the U.S. will beef up the fight against IS, although U.S. officials have suggested those steps are in the works. Defense Secretary Ash Carter has said the Pentagon is seeking ways to increase military support for the fight, including a likely increase in U.S. forces, along with the possible use of Apache helicopters for Iraqi-led combat missions.

The visit to the CIA’s campus in suburban Virginia was designed to assure Americans that the U.S. is fully engaged in the fight, despite persistent complaints from Obama’s critics that his strategy isn’t aggressive enough. Indeed, in recent months Obama has made similar field trips to the Pentagon and the State Department to illustrate how all facets of the U.S. government are on the case.

“They are working around the clock to keep us safe,” Obama said, adding that CIA operatives had thwarted terrorists repeatedly without being able to acknowledge it publicly. “They don’t get a lot of attention.”

Though Obama gave an optimistic portrayal of progress in both Iraq and Syria, the picture on the ground remains muddled at best.

In Syria, escalating fighting between the government and militants has threatened to jeopardize a fragile cease-fire the U.S. and Russia brokered earlier this year. Peace talks resumed Wednesday in Geneva aimed at resolving Syria’s civil war, though deep disagreements about who should participate have continued to plague that process.

Syrians living in parts of the country still under government control also voted Wednesday in parliamentary elections that Syrian President Bashar Assad’s opponents dismissed as a sham intended to lend an air of legitimacy to his beleaguered government, in yet another worrying sign for the peace talks.

The uptick in violence in Syria has raised difficult questions about how to proceed if the truce falls apart and frees Assad and his Russian backers to resume attacks on U.S.-supported opposition groups. Russia, which had been bolstering Assad with an air campaign against his opponents, recently ordered a drawdown in warplanes, but said strikes would continue against IS and the al-Qaida-linked Nusra Front. Both of those groups are excluded from the cease-fire.

In Iraq, Obama pointed to the Iraqi military’s preparations to retake the IS stronghold of Mosul as an example of increased momentum in the fight. Yet modest signs of progress have been tempered by ongoing sectarian challenges and a political crisis in Baghdad that have threatened to further destabilize the country.

Obama’s remarks at the CIA came the week before he travels to Saudi Arabia for a summit with Persian Gulf leaders focused largely on the threat from the Islamic State. Previewing his request to countries attending that summit, Obama said “the entire world” must step up to help Iraq restore stability “so that ISIL cannot return.”