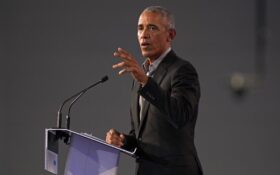 Former President Barack Obama has been living a jet-set lifestyle since leaving the White House five years ago.

On Saturday, the former president was enjoying a fancy dinner with his two daughters… and he reportedly left his Secret Service SUV parked in a handicapped spot for two hours.

The family was eating at Hamasaku, a trendy restaurant in Los Angeles known for its fine wines and its $24 rolls of sushi.

The former president — an apparent fan of summer colors — was wearing white in the September video.

One Twitter user responded with a quote by House Republican Leader Kevin McCarthy: “Rules for thee, not for me.”

Another asked, “You think he parks the truck?”

That user was onto something. In the video, Obama boards the backseat of the truck when leaving the restaurant. Former presidents may receive a Secret Service detail for the rest of their lives, although they may decline the option.

California has become known for its strict regulation on motor vehicles, and it may charge up to $500 for illegally parking in a handicapped spot, according to SFGATE.

Both daughters live either in or near Los Angeles.

Sasha Obama, 21, is reportedly finishing college at the University of Southern California, a private school. Malia Obama, 24, works in the film and television industry. She’s currently screenwriting for Hive, a prestige series on Hulu.

Former First Lady Michelle Obama appears to have sat out the dinner. The next day, she spoke in Seneca Falls, New York, at her induction ceremony into the Women’s Hall of Fame.