Obama destroying jobs by stalling on pipeline - The Horn News 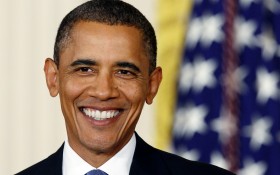 President Obama is deliberately ignoring the Keystone XL pipeline project trying to run out the clock on his presidency, at the cost of 42,000 well-paying jobs for Americans.

An investigation by the Associated Press reveals there’s no reason to drag this project on as long as it has been, except if the administration isn’t planning on actually doing anything.

For six and a half years, the White House has had a quick comeback to questions about its yet-to-be-announced decision on the proposed Keystone XL pipeline: Talk to the State Department.

Oil pipelines crossing U.S. borders require a presidential permit, setting off a government-wide review that the State Department coordinates. But a review of every cross-border pipeline application since 2004 shows that the Keystone review has been anything but ordinary.

Since April 2004, the federal government has taken an average of 478 days to give a yes or no to all other applications — less than a year and a half. The company hoping to build Keystone has been waiting for a decision for nearly 7 years — or more than five times the average.

The State Department does bear responsibility for reviewing potential pipelines, former White House staff say this policy was never intended to outsource the final decision. After all, it’s called a presidential permit. The revamped process was intended to speed up, not slow down, permits for major infrastructure projects, those officials said.

Republicans and energy advocates have pressed Obama to approve the $8 billion project.

The company first applied in September 2009 for a permit to build the 1,179-mile pipeline, which would connect Canada’s tar sands with crude oil refineries on the Texas Gulf Coast. When Congress in 2012 gave Obama a deadline to make a decision, he rejected the permit on grounds he didn’t have enough time to thoroughly review it, but allowed TransCanada Corp. to reapply.

Since then, the administration has declined to say what’s taking so long, or to offer insight into the deliberations.