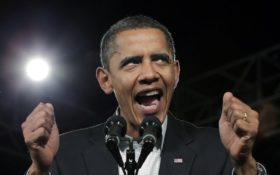 For years, we have known that the witch hunt that paralyzed Donald Trump’s presidency for two years was opposition research paid for by Hillary Clinton’s campaign — but the money trail goes even higher.

Former President Barack Obama paid big bucks to the man who brought the phony Russian dossier to FBI agents… and he made sure the money came out of taxpayer’s pockets!

Ohr, who was Associate Attorney General at the time, took the dossier to the FBI and got $14,520 in 2015, the year Donald Trump entered the presidential race.

So, what services did Ohr provide that were so valuable?

As soon as the phony Russian dossier was finished, Bruce Ohr took it to the FBI, which used the questionable document as an excuse to get a FISA warrant to spy on Donald Trump’s 2016 presidential campaign.

Bruce Ohr spent 2015 and 2016 feeding a steady diet of anti-Trump lies and disinformation to two branches of the Obama surveillance team… and was rewarded handsomely for it.

The DNC and Obama played a brilliant game meant to entrap and destroy Trump — and use taxpayer dollars to pay for it all.

The Democratic National Committee allegedly laundered a check to the opposition research group Fusion GPS through lawyers at Perkins Coie. Fusion GPS specializes in whipping up much negative “intelligence” — and the truth was no concern.

Bruce Ohr’s wife, Nellie Ohr, worked for Fusion GPS. In fact, her boss Glenn Reynolds admitted he knew that before he hired her.

Ohr was also a close friend and associate of Christopher Steele, the British spy who compiled the debunked dossier.

A little-known part of federal law says that if Ohr learns intelligence from any source, he has to pass it on to others in the system.

So, Ohr kept meeting with Steele private — even after the government fired Steele for publicly admitting he was a spy. Only after Steele was fired did Ohr pass on the “intelligence” he learned about Trump.

In other words, Ohr may have been acting as a backdoor for Fusion GPS to get its rumors and innuendo in front of the FBI brass… which let Obama spy on the Republican presidential candidate.

In exchange, he was given hefty “performance bonus” checks by the administration.

At one meeting, Steele told Bruce that he learned Russian intelligence had Trump “over a barrel” and could blackmail him in the White House.

Within 11 days of Trump sealing the Republican nomination, the Obama administration went to court to spy on him.

And it was all thanks to Ohr and his friends, critics say.

According to testimony from last summer, which was released months later, Ohr always said he warned the FBI that the information came from Steele and may not be totally reliable.

But he never mentioned that he was married to Nellie Ohr, who testified that she worked night and day dredging up opposition research on Trump’s entire family to connect them to Russia for Fusion GPS.

That led to the first of several demotions for Bruce Ohr… but despite this, he was given pay raises.

Judicial Watch President Tom Fitton said the bonuses “raise questions as to whether the conflicted Bruce Ohr, who the FBI used to launder information from Christopher Steele was rewarded for his role in the illicit targeting of President Trump.”

Hillary Clinton was supposed to win and make sure none of this ever came to light. But after the bombshell 2016 election, Trump has ripped the lid off the spying scandal — and now the moles are running from the light.

Ohr claims it was Obama’s Justice Department, not him, that covered up his connections to Fusion GPS.

Relax, Bruce, you can explain it all to the judge.

On Monday, Congressman Doug Collins, R-G.A., said the Democrats keep going after the president “just because he had the audacity to win an election against the Democrats’ candidate.”

The Ohr family were big players in that conspiracy.

The big story that the Fake News Media refuses to report is lowlife Christopher Steele’s many meetings with Deputy A.G. Bruce Ohr and his beautiful wife, Nelly. It was Fusion GPS that hired Steele to write the phony & discredited Dossier, paid for by Crooked Hillary & the DNC….

So, the Democrats allegedly laundered money to Fusion GPS, which paid Bruce Ohr’s wife. Then, Bruce Ohr took the disinformation to Obama, so the administration could “legally” spy on the Trump campaign.

As a thank you, Obama then paid Ohr by doubling his performance bonus.

It’s more proof that the Obama administration was up to its eyeballs in corruption — and the bad actors haven’t been rooted out yet.