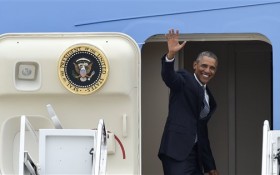 Ahead of his trip to the Arctic, President Barack Obama took time from the day to appease political correctness fanatics and erase a former Republican president’s name from North America’s tallest peak.

Obama announced Sunday that his administration would rename Mount McKinley as Denali, its traditional Athabascan name. The move to strip the mountain of its name honoring former President William McKinley, a son of Ohio, drew loud condemnations from Ohio lawmakers.

“This political stunt is insulting to all Ohioans, and I will be working with the House Committee on Natural Resources to determine what can be done to prevent this action,” added Rep. Bob Gibbs, R-Ohio.

In renaming the 20,320-foot mountain, Obama was recognizing the moniker informally used for centuries. The name means “the high one” in Athabascan.

The peak, which is growing at about a millimeter a year, was named Mount McKinley in 1896 by a prospector exploring mountains in central Alaska, the White House said. Upon hearing the news that McKinley was the Republican presidential nominee, the prospector named it after him. The name was then formally recognized.

McKinley was a native of Ohio who successfully navigated the United States to victory in the Spanish-American war before being assassinated in office in 1901. During his time as President, he also annexed what is now the State of Hawaii for the United States, a move that made the United States a major Pacific power.