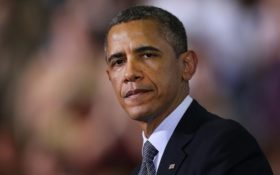 For the second time in less than two weeks, it has been revealed that Mueller’s final report contains a massive lie used to smear President Donald Trump.

According to an explosive piece from The Hill’s John Solomon, buried deep in the Mueller report is a section that asserts that Ukrainian businessman Konstantin Kilimnik, who worked for Trump campaign chairman Paul Manafort, is tied to Russian intelligence.

However, upon further digging, it was revealed that Kilimnik is actually linked straight to former President Barack Obama’s adminsitration.

Kilimnik previously worked with the Obama State Department as a trusted asset, and “delivered written reports to U.S. officials via emails that stretched on for thousands of words.”

“But hundreds of pages of government documents — which special counsel Robert Mueller possessed since 2018 — describe Kilimnik as a ‘sensitive’ intelligence source for the U.S. State Department who informed on Ukrainian and Russian matters,” Solomon wrote.

“Why Mueller’s team omitted that part of the Kilimnik narrative from its report and related court filings is not known. But the revelation of it comes as the accuracy of Mueller’s Russia conclusions face increased scrutiny,” he said.

Solomon writes that the “FBI knew all of this, well before the Mueller investigation concluded.”

So while Obama was in office, Kilimnik worked with the Obama State Department and served as a vital source for U.S. officials.

But when he briefly worked for Manafort, the president’s one-time campaign manager, Mueller labeled him as a “threat” with ties to “Russian intelligence” and implied he was a “spy” of some sorts.

And yet, Mueller and his team of Democrats chose to omit this key information about the Manafort/Kilimnik relationship in their final report.

This is the Mueller “sleight of hand,” where critics say he takes a set of facts and twists them to fit his “collusion” narrative — and another blow to the credibility of the report.

The Horn News reported last week that another bombshell inside Mueller’s report was discovered by conservative talk radio host Rush Limbaugh. Limbaugh claimed that the special counsel’s team went out of their way – perhaps illegally – to portray the president as guilty.

Mueller lied when he claimed that he could not “make a determination” about charges against Trump during his rare press briefing from the DOJ two weeks ago, Limbaugh claimed.

As Limbaugh noted, it makes no sense for Mueller to write in his report that Trump did not break any laws, but then tell the liberal media that he wasn’t able to “make a determination” on whether to charge the president.

Mueller’s statement was called an “abomination” and the validity of the entire investigation has been questioned.  Nothing more than an attempt to help Democrats impeach Trump.

Mueller had over two years to investigate Trump with dozens of anti-Trump officials and a budget that almost exceeded $40 million.

If he had any evidence to charge Trump, he would have.

But because his witch hunt came up short, Mueller is misconstruing his own report and trying to save face with Democrats and the liberal media, who have been invested in Trump-Russia collusion conspiracy theories since the day the president took office.