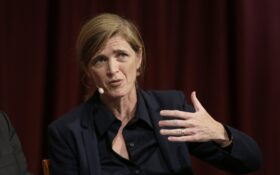 One of the most influential members of the Biden administration has been caught red-handed lying about investments she holds in an offshore tax haven, documents obtained by a conservative investigation have found.

Either she lied or she cashed in on her government position for a major payday, it would seem.

She’s Samantha Power. You may not know her name, but she probably knows yours.

Power was one of the top advisors to Barack Obama during his administration, and she’s one of the biggest power players in Obama’s third term, which is taking place in President Joe Biden’s name.

In order to “serve” in a public office, Power had to declare the stocks she owns… and documents show she either lied or had a logic-defying stock gain.

Power is trying to claim one of her offshore investments increased by 10 to 100 times its original amount in seven months.

When Joe Biden put Power in charge of handing out half of all U.S. foreign aid, she had to declare to the Senate where she put her money, and how much she had.

Biden named Power administrator of U.S. Agency for International Development (USAID), she said she had an investment in a Cayman Islands group called “The Social+Capital Partnership GP III, L.P.” In February, she said her share of the investment was worth between $50,000 and $100,000. The Senate confirmed her to head up USAID in April by a 68-26 vote, and in June she obeyed a federal law that required her to sell off that investment—for somewhere between $1 million and $5 million.

“Being as generous as possible, if the value of her initial filing in January 2021 was at the highest amount allowed by the range or $100,000; and the value a the sale in June 2021 was at the lowest range or $1,000,001, this is 10x the value of the asset than what was initially reported,” according to a federal complaint issued by the American Accountability Foundation.

If Power declared the value at closer to $50,000 in her first filing and $5 million in the second, that would mean its value increased 100 times over… just during the brief time she got named to head up a federal agency that hands out billions in U.S. grants.

So, critics want to know: Did she lie, or did she take a payout, possibly in exchange for U.S. foreign aid grants?

“As the head of a government agency, Administrator Power is expected to be above reproach and demonstrate the highest standard of ethics,” said Matt Buckham, the co-founder of American Accountability.

The Democrats can count on the Fake News media to ignore the story or tell readers that this is no big deal — but Buckham says Americans shouldn’t believe it. This financial scandal goes to the heart of her dishonesty, greed, and self-serving while posing as a “public servant.”

“This is not a simple discrepancy, but a significant increase that calls her integrity, honesty and even appointment into question,” said Buckham.

“Due to the large discrepancy between Ms. Power’s initial reporting prior to her confirmation and the report filed at the sale of her assets, we urge the Office of Government Ethics to investigate the matter for any potential misconduct that may have occurred,” he wrote in a letter to the director of that federal investigative body, Emory Rounds.

It’s bad enough that Democrats in government seem to get huge sweetheart deals when it looks like they’re coming to power—whether it’s Hillary Clinton at the Rose Law Firm and the Clinton Foundation, or Hunter Biden getting hundreds of thousands of dollars from China and Ukraine, or whether it’s Power’s fishy stock deal.

It’s worse that Power was nominated at all, considering the way she tried to spy on American citizens while helping terrorist-tied “charities” during the Obama administration.

Power also “served” in the Obama administration as U.S. Ambassador to the United Nations. She promoted a controversial view of government that supported sending the U.S. military all over the world to help Third World radicals—especially in Libya.

In the Obama administration, she tried to convince other federal departments to remove a “charity” called the Islamic Relief Agency from the Treasury Department’s sanctions list…even though the group had financial ties to Osama bin Laden and other terrorists, according to the Middle East Forum. She also supports sending hundreds of millions of U.S. taxpayers’ dollars to the Palestinian government, which supports suicide bombers against U.S. allies.

But probably her most despicable act during the Obama years has been to be her role in the Obama administration’s coup against the incoming Trump administration—when Power tried to unmask at least 260 people, including General Michael Flynn.

If Power lied on her government forms and lied on her personal forms, at least that shows a certain kind of consistency in fraud.

Somebody like that should never be in any position to abuse a government position for personal gain—whether she’s profiting politically or financially.

The good news is that if she’s found guilty of lying, Power could face up to a year in prison or $50,000 in fines, according to the Washington Free Beacon.

At least some real justice could be served.