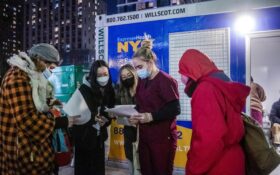 Mayor Bill de Blasio said no decision had been made on banning people from the annual ball drop celebration, even as Fox said it was canceling its live broadcast because of concerns about the omicron variant.

“The preference is to keep it on, it’s an important event for the city,” de Blasio told MSNBC, adding that revelers would have to show vaccination proof and that officials were weighing other precautions.

Some 17,200 people tested positive in the city Tuesday setting another new one-day record since testing became widely available. New York City has seen the average number of people testing positive each day spike more than 220% in a week.

At least 89,000 people in the city tested positive in the seven day period that ended Tuesday.

Cases are also rising on Long Island, in the mid-Hudson Valley and in central New York counties such as Tompkins County, where Cornell University has faced an outbreak.

Still, because of widespread vaccination, hospitalizations and deaths from the virus are far fewer than at the pandemic’s height, or even during a holiday-period surge last winter.

New York hospitals are up to 4,452 patients as of Tuesday — up 18% from the previous Monday.

That’s below more than 6,000 patients were hospitalized in mid-December 2020.

Dr. Mitchell Katz, CEO of the city’s hospital system, said the 11 city-run hospitals had a total of 54 COVID-19 patients in intensive care as of Wednesday — up from 20 a few weeks ago, but a mere fraction of the 970 ICU patients at the peak in March 2020.

De Blasio said the city was opening seven additional testing sites Wednesday, increasing its total to 119, and will set up five distribution sites — one in each borough — on Thursday to hand out at-home rapid COVID-19 tests, which have been hard to come by at pharmacies.

The news of more city-run testing sites came as CityMD, the privately run chain of urgent care clinics, said it was temporarily closing 13 city locations “to preserve our ability to staff our sites.” CityMD has seen testing lines wrapping around city blocks and wait times of several hours.

Senate Majority Leader Chuck Schumer, who joined de Blasio at his news conference Wednesday and was honored with a key to the city, said he’s asking the federal government to send the city 100 mobile testing sites.

New measures to curb the spread of COVID-19 include requiring police officers to wear masks indoors and outdoors when interacting with the public. The NYPD has a vaccine mandate, but officers are still getting sick — with about twice as many out Tuesday as on an average day.

Even a Christmas staple was imperiled by the spike, as the New York City Ballet canceled its performance of “The Nutcracker” through Monday, citing “a number of” breakthrough infections in the production.

The city is also temporarily limiting visitation at city-run hospitals, with exceptions for pregnant people, children and hospice patients, and moving from in-person visits to televisits at city jails, where the COVID-19 positivity rate has soared in the last 10 days from 1% to 17%.

Jail Commissioner Vincent Schiraldi sent a letter Tuesday asking judges to consider alternatives to incarceration, writing that all indications suggest inmates face “an equal or greater level of risk” as at the start of the pandemic.

According to Schiraldi, just 45% of city inmates have gotten one dose of the COVID-19 vaccine, and only 38% are fully vaccinated. In comparison, at least 90% of city adults have received one dose and more than 82% of adults are considered fully vaccinated.

But north of New York City, hospitalizations are climbing in rural, central New York communities that are seeing more patients than this time last winter: Columbia County reports 26 patients, more than double the number in mid-December 2020.

Broome County, along the state’s border with Pennsylvania, reports 118 patients, a 30% increase compared to last December.