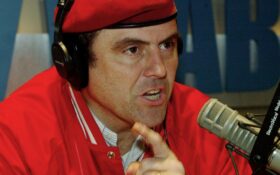 Curtis Sliwa – founder of New York’s iconic red-beret-wearing Guardian Angels – says a violent protester broke his jaw as he tried to defend a store from looters.

“Throughout the coronavirus pandemic, we have mostly been in Chinatown to stop any hate crimes against Asians,” Sliwa told Fox News. “But on Tuesday night, we were in SoHo working our way down Broadway when we heard about looters trying to get into a Footlocker, and we immediately ran to that location.”

He said his Guardian Angels – who are not armed – defended the store from the first wave of looters.

“They tried to get in, but we weren’t going to let them,” he said.

But they soon came back with more people as well as hammers, bats and lock cutters.

“They were strictly there to cause as much damage as possible, loot as much as they could,” Guardian Angel Aram Sabet told ABC 7 in New York.

He said the Guardian Angels were eventually outnumbered by a mob of about 150.

“They started swinging at us,” Sliwa told Fox News. “But we were not going to let them get inside. We were slamming and jamming quite a few of them. They were throwing glass bottles filled with liquids, as well as bricks and rocks. It was quite the battle.”

The Guardian Angels are standing outside a Foot Locker on Broadway that was looted multiple times last night — NYC of the 70s and 80s pic.twitter.com/MyLF1LKpHT

He told NBC’s “Today” show that getting between criminals and their targets is what they do.

“We’re not just ‘see something, say something,’” he said. “You have to physically intervene and get between them and the retail establishment and you let them know, ‘No, no, you ain’t breaking into this store.’ And it’s a standoff.”

And sometimes, that means taking a hit: Sliwa suffered a fractured jaw while Sabet had a broken nose and eye socket, and needed 48 stitches.

Sliwa is no stranger to street fights, not just in his rough-and-tough earlier years of the Guardian Angels in a city known for its crime, but even now.

In Dec. 2018, he got into it with a teenager who mocked his signature red Guardian Angels jacket and beret and then sucker-punched him.

“I let my guard down, and I got popped,” Sliwa told The New York Post. “Next thing I knew, I was spitting out my tooth.”

But he’s best known for his heyday in the mean streets of New York, taking on crime – including the mafia, which put a hit on him… and almost succeeded.

In a moment that seems straight from a Scorsese movie, mob hitmen hiding in a stolen taxi fired on Sliwa and hit him several times. The wounded Sliwa dove into the window of a moving cab and escaped.

That didn’t deter him; Sliwa remains a recognizable figure in the city, as are the red berets of his Guardian Angels.

Since the coronavirus pandemic began, the group’s members have been cleaning up subway cars and caring for the homeless.

“We’re washing their hands, washing their faces with an alcohol solution, and then we’re giving them nutrition that’s going to last them through the day,” he told Fox 5 New York in April.

Now, with looters roaming the streets during the protests, it’s back to their primary mission of public safety.

“We’ve been through this before,” Sliwa told NBC’s “Today” show. “When there is insurrection, that’s part of the political process. There will be demonstrations. And then all of a sudden, when the sun goes down, it’s a whole different order to what’s happening, and that’s the organized mayhem and looting that you see.”

He added that pretty much everyone – on every side – knows who they are.

Sliwa has said he will run for mayor as a Republican in next year’s election.