Nursing homes are reducing use of these drugs (Here's why... ) - The Horn News 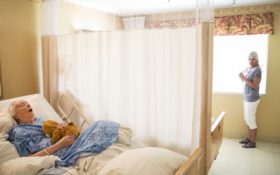 U.S. nursing homes have significantly reduced the use of powerful antipsychotic drugs among their elderly residents, responding to pressure from many directions. Yet advocacy groups insist that overmedication remains a major problem, and want the pressure to intensify.

According to the latest data from the federal Centers for Medicare & Medicaid Services, known as CMS, the percentage of long-term nursing home residents being given antipsychotic drugs dropped from about 24 percent in late 2011 to under 16 percent last year. Decreases were reported in all 50 states, with the biggest in Tennessee, California and Arkansas.

Dr. Jerry Gurwitz, chief of geriatric medicine at the University of Massachusetts Medical School, depicts the overall decrease as “one of the most dramatic changes I’ve seen in my career.” He wonders, however, if some nursing homes might be finding other medications that sedate their patients into passivity without drawing the same level of scrutiny as antipsychotics.

Advocacy groups — including the Washington-based Center for Medicare Advocacy and AARP Foundation Litigation — say even the lower rate of antipsychotic usage is excessive, given federal warnings that elderly people with dementia face a higher risk of death when treated with such drugs.

“Given the dire consequences, it should be zero,” said attorney Kelly Bagby of the AARP foundation, which has engaged in several court cases challenging nursing home medication practices. Bagby contends that the drugs are frequently used for their sedative effect, not because they have any benefit to the recipients.

The advocacy groups’ long-running campaign was reinforced Monday with the release of a detailed report by Human Rights Watch urging federal and state authorities to take tougher measures against improper use of antipsychotic drugs.

“On paper, nursing home residents have strong legal protections of their rights, but in practice, enforcement is often lacking,” said the report, based on interviews with more than 300 people and visits to 109 nursing homes in six states.

Ten years ago, according to the Department of Health and Human Services, roughly 270,000 nursing home residents suffering from dementia were receiving antipsychotic drugs even though such medications are not approved to treat that condition. The powerful class of drugs is intended, instead, to treat serious mental illnesses such as schizophrenia and bipolar disorder.

Analyzing the latest government data, Human Rights Watch estimates there are now about 179,000 people in nursing homes who get antipsychotics every week without having a diagnosis for which the drugs are approved.

“Antipsychotic drugs alter consciousness and can adversely affect an individual’s ability to interact with others,” the new report says. “They can also make it easier for understaffed facilities, with direct care workers inadequately trained in dementia care, to manage the people who live there.”

The report also says that nursing homes, in violation of government regulations, often administer antipsychotic drugs without obtaining consent from residents or the relatives who represent them.

Hannah Flamm, the report’s lead author, said the recent data showing a decline in antipsychotic usage demonstrated how extensive the overmedication problem had been. In an interview, she said the lower numbers don’t impress her.

“Would you want to go into nursing home if there’s a one in six chance you’d be given a drug that robs you of your ability to communicate?” she asked. “It’s hard for me to applaud the reduction when it’s inexcusable to ever misuse these drugs.”

The American Health Care Association, which represents more than 13,000 U.S. nursing homes, was active in the national partnership formed by CMS in 2012 that worked to reduce unnecessary use of antipsychotics.

The association’s senior vice president for quality and regulatory affairs, Dr. David Gifford, said a majority of the organization’s members reduced usage by more than 30 percent, while some others failed to fully embrace the initiative.

The biggest challenge, Gifford said, is to change a mind-set among some nursing home staff and some residents’ families that behavior arising from dementia is “abnormal” and warrants the use of antipsychotics.

Advocacy groups contend that federal enforcement of medication regulations has been too lax and will only grow more lenient as President Donald Trump’s administration pursues an agenda of deregulation.

“They’re helping the industry, not the patients,” said attorney Toby Edelman of the Center for Medicare Advocacy:

Gifford disagreed that enforcement was inadequate.

“The advocates want it to move faster, and I don’t blame them for wanting that,” he said. “But the approach being used is very successful.”

Gifford also disagreed with the suggestion that nursing homes used the antipsychotics as a sedative to compensate for staffing shortages.

“If someone is sedated, you need more staff,” Gifford said. “The amount of staff is related to how much people can do for themselves.”

Laurel Cline, a California woman whose 88-year-old mother has dementia, described a different scenario. She said her mother, during stays at three different nursing homes in recent years, was sometimes left neglected for hours at a time in her wheelchair after being given antipsychotics.

In each facility, Cline said, it was a struggle for her to convince management that those dosages should be stopped. On a few occasions, she said, staff members said her mother would have to leave the home if she were taken off antipsychotics.

“Instead of seeing what’s wrong with her, they just want to drug her up,” said Cline.