Nurse stunned after saving patients from wildfire - The Horn News 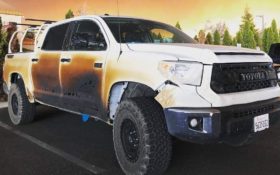 A nurse that came to the rescue of dozens of his patients, at great personal cost, is now having the favor returned. After sacrificing his truck to the flames to rush to get to the hospital, Toyota paying tribute to the man who risked his life .

Allyn Pierce was trapped by flames while trying to flee the California wildfire approaching the hospital he works at in Paradise. He managed the intensive care unit at Adventist Health Feather River hospital, and he and his colleagues gathered in his truck to try and escape the blaze.

When he finally saw an opportunity to get clear, instead Pierce turned his truck around and went back to the hospital to save dozens of his patients. His like-new Toyota Tundra was burnt and melted by the blaze — and now Toyota is coming to his rescue.

After Pierce and his colleagues returned to the hospital, they pulled equipment outside from the endangered building and set up a triage.

He was able to get everyone out of the intensive care unit and filled the seats of his truck to head back to safety.

Following the harrowing incident, Pierce posted a photo to Instagram of his now-burnt truck.

Here's my @toyotausa commercial. This truck literally saved my life today. My little town of Paradise was literally burning down around me and @the_pandra got me to safety where I could help others…twice. #campfire #perfectmarshmellow #meltedplastics #buttecountyfire #sema2019 thanks to the fire fighters, law enforcement and my fellow healthcare workers for the work we all did getting the hospital evacuated and our patients to safety. ????????????

He wrote alongside the photo, “Here’s my @toyotausa commercial. This truck literally saved my life today. My little town of Paradise was literally burning down around me and @the_pandra got me to safety where I could help others…twice.”

Although Pierce may have made it out of the blaze safely, he lost his home and truck, and his hospital burned down.

A well-wisher created a GoFundMe page in Pierce’s honor, and in just 3 days, the page had exceeded its goal of reaching $15,000.

On Monday, Pierce posted to Instagram, reluctantly sharing the page that was set up on his behalf. He wrote, “I struggled posting this, but with my house gone and my hospital… I don’t know where my job sits. I’m gonna swallow my pride and post this GoFundMe that a kind person in Chico set up for us.”

“We will be fine, it will all work out, because it has to,” Pierce added.

Pierce’s story has since gone viral — and someone at Toyota heard about his efforts.

“Our hearts go out to the victims of the devastating California wild fires,” the automaker’s statement reads.

”We are extremely grateful to all of the emergency crews who are working tirelessly to extinguish the fires and helping people to safety. We are especially thankful to one hero in particular, Allyn Pierce, for risking his life and sacrificing his Toyota Tundra to drive people to safety. Toyota is so humbled by Mr. Pierce’s selfless act that we’re pleased to offer him a brand new Tundra.”

Pierce has not publicly responded to Toyota’s generous offer, but he has said that his experience will stay with him forever.

“It’s completely traumatic,” he said. “When I close my eyes at night, I see fire.”