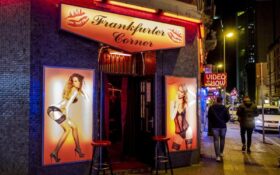 Legislation in 2002 legalized and regulated prostitution in Germany, giving sex workers social benefits, and they are now obliged to register. But brothels have been closed for much of the time since the COVID-19 pandemic hit in March 2020 as part of wider lockdowns.

At the end of last year, 24,940 prostitutes were officially registered with authorities, the Federal Statistical Office said. That was down from some 40,400 a year earlier — a 38% drop.

One-fifth of the registered sex workers were German citizens. They were joined by 8,800 Romanians, 2,800 Bulgarians and 1,800 Hungarians, among others.

It isn’t clear how accurate a picture the figures paint of the state of the business. Among other issues, registration processes were also disrupted by the pandemic and it has taken time to get reporting processes established over recent years.

By some past estimates, more than two-thirds of sex workers aren’t registered. The statistics office noted that it is unable to give information on unregistered sex workers and brothels.

The number of officially sanctioned establishments offering sex services — the vast majority of them brothels or the like — stood at 2,290 at the end of last year, a 5% rise from the 2,170 registered a year earlier.