Nudist hunts down boar who stole his laptop! - The Horn News 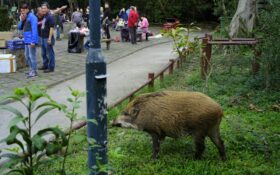 A German nudist had the last laugh after giving chase to a wild boar that had run off with a bag containing his laptop.

Pictures posted on social media show the naked man running after a sow and her two piglets to the mirth of fellow bathers at Berlin’s Teufelssee, or Devil’s Lake.

Adele Landauer, an actor and coach who says she took the pictures, wrote that the pigs first helped themselves to somebody’s pizza before grabbing the bag.

When the owner realized what had happened, he “gave his all” and recovered it, she said.

“When he came back with his yellow bag in the hand we all clapped and congratulated him for his success,” she added.

Landauer said she later showed the man the pictures she had taken and “he laughed loudly and authorized me to publish them.”

Wild boars are common in the forests around Berlin and can occasionally be seen venturing through city parks in search of food.