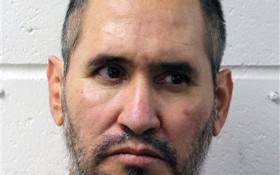 A vicious hitman responsible for the murder of dozens of people across the United States as an enforcer for Mexican drug cartels will hear evidence in court Tuesday that prosecutors say proves he gunned down at least nine people throughout central California.

Authorities say Jose Manuel Martinez, 53, confessed after his arrest in 2013, and detailed a long, violent career with over 30 victims.

Martinez has pleaded not guilty to the charges, which make him eligible for a death sentence if he is convicted. Attorneys with the Tulare County Public Defender’s Office did not respond to requests for comment Monday on Martinez’s behalf.

In California, he is accused of killing people in Tulare, Kern and Santa Barbara counties between 1980 and 2011. The victims ranged in age from 22 to 56, authorities say.

In 1980, Martinez shot a man who was driving to work with three others in the vehicle, investigators say. Martinez is accused of shooting another man in bed early one morning in 2000 while the man’s four children were home.

Martinez had lived at times in Richgrove, a small farming community in central California about 40 miles north of Bakersfield. He was arrested shortly after crossing the border from Mexico into Arizona.

Authorities first took Martinez to answer charges in Alabama, where they say he began to talk.

“After he confessed to it, it was just like opening up the floodgate,” Tim McWhorter, of the Lawrence County Sheriff’s Office in Alabama, said at the time.

Prosecutors have said they believed him because he gave details that nobody else would have known. McWhorter said Martinez stopped short of naming his cartel associates.

In Alabama, Martinez pleaded guilty and accepted a 50-year prison sentence last year for shooting a man to death for making derogatory remarks about Martinez’s daughter.

Prosecutors in California have made few details public about the evidence they have linking Martinez to the nine killings. Stuart Anderson, a spokesman for the Tulare County District Attorney’s Office, declined to comment ahead of Martinez’s preliminary hearing.

At the end of it, a judge will decide if there is enough evidence to order Martinez to stand trial.