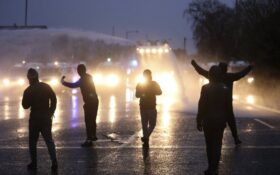 Police in Northern Ireland deployed water cannons for the first time in six years Thursday as they tried to disperse protesters who hurled stones, fireworks and gasoline-filled bottles at officers during another night of violence in Belfast.

The violence erupted last week as anger over COVID-19 restrictions and post-Brexit trade rules fueled tensions between the Protestant and Catholic communities in Northern Ireland.

While the crowds appeared somewhat smaller Thursday, police said a further 19 officers were injured, bringing the total over the past week to 74.

Northern Ireland’s justice minister, Naomi Long of the centrist Alliance Party, appealed for an end to the “depressing and reckless” scenes.

“My heart goes out to those living in the area who are living with this fear and disturbance,″ she wrote on Twitter. “This needs to stop now before lives are lost.”

Earlier Thursday, the Northern Ireland Assembly had unanimously passed a motion calling for an end to the disorder. The region’s power-sharing government, which includes representatives from both sides of the sectarian divide, condemned the violence.

“While our political positions are very different on many issues, we are all united in our support for law and order and we collectively state our support for policing and for the police officers who have been putting themselves in harm’s way to protect others,” leaders of the five-party government said in a joint statement.

“We, and our departments, will continue to work together to maximize the support we can give to communities and the (Police Service of Northern Ireland) to prevent further violence and unrest.”

Northern Ireland has seen sporadic outbreaks of street violence since the 1998 Good Friday agreement ended “the Troubles” — decades of bloodshed in which more than 3,000 people died.

While the peace accord ended the killing, tensions remain between those who see themselves as British and want to remain part of the United Kingdom, and those who seek reunification with the Republic of Ireland to the south. The two sides of the debate split largely on religious lines, with Protestants generally favoring the status quo and Catholics campaigning for reunification.

Britain’s exit from the European Union has heightened those tensions amid concerns about the border between Northern Ireland and the Republic. In an effort to keep the border open, Britain agreed to conduct some checks on goods at ports in Northern Ireland rather than at the frontier, the U.K.’s only land border with the EU.

Those who favor union say the new checks amount to the creation of a border between Northern Ireland and the rest of the United Kingdom — something they fear undermines their place in the U.K.

The unionists are also angry at prosecutors’ decision not to prosecute politicians who attended the funeral of a former Irish Republican Army commander in June. The funeral of Bobby Storey drew a large crowd, despite coronavirus rules barring mass gatherings.

The main unionist parties have demanded the resignation of Northern Ireland’s police chief over the controversy, claiming he has lost the confidence of their community.

Artery-Widening Breakthrough NOBODY (in the U.S.) Is Talking About [Sponsored]

But law enforcement officials warn that sectarian divisions are also being exploited by paramilitary groups that use the violence to further criminal activities.

“There are young people who are being cynically used by older more sinister elements of society, more than likely aligned to what we would call paramilitary (groups), but which anywhere else are criminal organizations, large criminal gangs,” Mark Lindsey, chairman of the Police Federation of Northern Ireland, told the BBC on Wednesday.