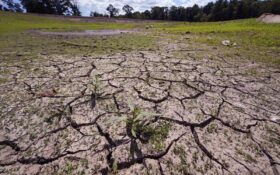 Vermont farmer Brian Kemp is used to seeing the pastures at Mountain Meadows Farm grow slower in the hot, late summer, but this year the grass is at a standstill.

That’s “very nerve-wracking” when you’re grazing 600 to 700 cattle, said Kemp, who manages an organic beef farm in Sudbury. He describes the weather lately as inconsistent and impactful, which he attributes to a changing climate.

“I don’t think there is any normal anymore,” Kemp said.

The impacts of a changing climate have been felt throughout the Northeastern U.S. with rising sea levels, heavy precipitation and storm surges causing flooding and coastal erosion. But this summer has brought another extreme: a severe drought that is making lawns crispy and has farmers begging for steady rain. The heavy, short rainfall brought by the occasional thunderstorm tends to run off, not soak into the ground.

Water supplies are low or dry, and many communities are restricting nonessential outdoor water use. Fire departments are combatting more brush fires and crops are growing poorly.

Providence, Rhode Island had less than half an inch of rainfall in the third driest July on record, and Boston had six-tenths of an inch in the fourth driest July on record, according to the National Weather Service office in Norton, Massachusetts. Rhode Island’s governor issued a statewide drought advisory Tuesday with recommendations to reduce water use. The north end of the Hoppin Hill Reservoir in Massachusetts is dry, forcing local water restrictions.

Officials in Maine said drought conditions really began there in 2020, with occasional improvements in areas since. In Auburn, Maine, local firefighters helped a dairy farmer fill a water tank for his cows when his well went too low in late July and temperatures hit 90. About 50 dry wells have been reported to the state since 2021, according to the state’s dry well survey.

The continuing trend toward drier summers in the Northeast can certainly be attributed to the impact of climate change, since warmer temperatures lead to greater evaporation and drying of soils, climate scientist Michael Mann said. But, he said, the dry weather can be punctuated by extreme rainfall events since a warmer atmosphere holds more moisture — when conditions are conducive to rainfall, there’s more of it in short bursts.

Mann said there’s evidence shown by his research at Penn State University that climate change is leading to a “stuck jet stream” pattern. That means huge meanders of the jet stream, or air current, get stuck in place, locking in extreme weather events that can alternately be associated with extreme heat and drought in one location and extreme rainfall in another, a pattern that has played out this summer with the heat and drought in the Northeast and extreme flooding in parts of the Midwest, Mann added.

Most of New England is experiencing drought. The U.S. Drought Monitor issued a new map Thursday that shows areas of eastern Massachusetts outside Cape Cod and much of southern and eastern Rhode Island now in extreme, instead of severe, drought.

New England has experienced severe summer droughts before, but experts say it is unusual to have droughts in fairly quick succession since 2016. Massachusetts experienced droughts in 2016, 2017, 2020, 2021 and 2022, which is very likely due to climate change, said Vandana Rao, director of water policy in Massachusetts.