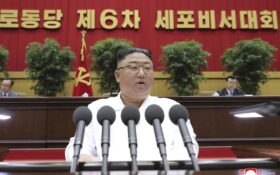 North Korea on Friday said the latest fever cases detected in its border region with China were tested to be influenza, not coronavirus infections as initially feared.

The report by North Korea’s official Korean Central News Agency came a day after the North said it locked down unspecified areas in Ryanggang province after four people had fevers that were suspected to be COVID-19.

North Korea maintains it has had no confirmed coronavirus cases since Aug. 10, when leader Kim Jong Un declared a widely disputed victory over the virus, just three months after the country acknowledged an omicron outbreak.

KCNA said diagnostic tests of samples, the nature of the symptoms, and information gained from contract tracing led health workers to conclude that the fevers were caused by influenza. The patients have since returned to normal temperatures, it said.

North Korean officials lifted the lockdown but urged residents to maintain vigilance by continuing to wear masks and reporting to health authorities immediately if they experience fever symptoms.

While Kim claimed that the country’s success against the virus would be recognized as a global health miracle, experts believe North Korea has manipulated disclosures on its outbreak to help him maintain absolute control. The victory statement signals Kim’s aim to move to other priorities, including a possible nuclear test, experts say.

After admitting to a coronavirus outbreak in May, North Korea reported about 4.8 million “fever cases” across its mostly unvaccinated population of 26 million but only identified a fraction of them as COVID-19. Experts say the country’s official death toll of 74 is abnormally small, considering the country’s lack of public health tools.

North Korea dubiously insists that rival South Korea was responsible for its COVID-19 outbreak and has warned of “deadly” retaliation, saying that the virus was transported by anti-Pyongyang propaganda leaflets and other materials flown across the border by balloons launched by South Korean civilian activists. South Korea has dismissed such claims as unscientific and “ridiculous.”