North Korea may join the Winter Olympics... - The Horn News 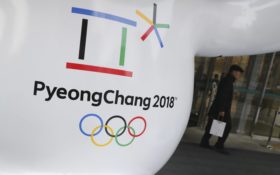 With little time to spare, North and South Korea are preparing to hash out Kim Jong Un’s offer to send a delegation to next month’s Pyeongchang Winter Olympics.

Skeptics are calling the offer, floated by Kim during his annual televised New Year’s address, a cynical tactic to drive a wedge between Washington and Seoul, while optimists see it as a sign of hope that Kim has decided to dial back his defiance and come in from the cold.

The answer probably lies somewhere in between.

But why, after a year marked by the test of his country’s most powerful nuclear bomb to date and a record number of missile launches, is Kim starting off 2018 by proposing talks across the Demilitarized Zone?

WHAT’S ON THE TABLE

Kim stressed in his speech that 2018 will be an important year for the Korean nation.

The North will be marking the 70th anniversary of its Sept. 9 founding and the South’s hosting of the games, Kim said, “will serve as a good occasion for demonstrating our nation’s prestige” and “we earnestly wish the Olympic Games a success.”

To that end, he suggested Pyongyang send a delegation and “adopt other necessary measures.” He presented all of it in a familiar framing — saying the Korean people must work together on their own toward reunification to “frustrate the schemes by anti-reunification forces within and without.”

In North Korea-speak, that means anti-Pyongyang hardliners in the South and the United States and its allies.

Kim did not say what kind of a delegation he has in mind. But North Korea quickly restored a hotline with the South that had been cut off for two years to allow communications to resume. South Korean President Moon Jae-in applauded the gesture and the two sides are set to meet on Tuesday at the border village of Panmunjom for the time since December 2015.

Just about the time the Olympics will be wrapping up and the Paralympics getting underway, tens of thousands of U.S. and South Korean troops would normally be staging the world’s biggest annual war games.

This year, however, Moon convinced President Donald Trump to postpone them until everything is over.

The exercises feature the United States’ most advanced weaponry and in recent years have included training for “decapitation” strikes on Kim himself. In his New Year’s address, Kim pointedly referred to that, claiming the U.S. can’t launch an attack “on me or our country” now that North Korea has a viable nuclear deterrent.

Kim would love to see the war games called off for good. Or at least scaled down.

With their postponement, he might believe Moon may be willing to go further down that path. And if Moon isn’t, Kim can say he tried and use that as a justification for launching more missiles or space-bound rockets and maybe even trying another nuclear test later this year.

The bottom line: it never hurts to take Seoul’s temperature every now and then.

Engaging directly with Seoul does, in fact, tend to complicate things for Washington. Sanctions, meanwhile, are taking their toll. Easing tensions would give Kim breathing room to boost the domestic economy.

One of his key projects — also mentioned in the New Year’s speech — is developing tourism in the Wonsan-Kumgang area on North Korea’s east coast. Kim already built a luxury ski resort there and doesn’t want to see it go to waste. With Trump’s North Korea travel ban now in effect, Pyongyang might be thinking of wooing tourists from the South.

Kim’s father, Kim Jong Il, had some success with that idea from the late 1990s until 2008, when a South Korean housewife was shot dead for wandering into a restricted zone.

UNUSUAL, BUT NOT UNPRECEDENTED

For sure, North and South Olympic rivalry runs deep.

The North boycotted the 1988 Summer Olympics in Seoul and instead hosted the World Festival of Youth and Students, a sort of socialist equivalent, the following year. The Koreas tried marching together under a “unification flag” in three Olympics, but that didn’t stick. The blue-and-white flag last flew at the 2006 Winter Games in Turin, Italy.

North Korea isn’t a big Winter Olympics country to begin with. It has only sent teams to eight and won only two medals: a silver in 1964 and a bronze in 1992. Both were won by women, in speed skating and short track skating.

Still, it’s not unprecedented for the North to send athletes to major competitions in the South.

Kim sent a full team to the Asian Games in Incheon in 2014 and dispatched three of his top lieutenants to attend the closing ceremony and meet with the South’s unification minister. Whatever progress was made in those talks seems to have dissipated soon after the trio went home, however.

ANY CHANCES OF GOLD?

It isn’t entirely clear if Kim intends to send athletes to Pyeongchang or just officials.

There might still be some wiggle room, but only two athletes, pair skaters Ryom Tae Ok and Kim Ju Sik, are qualified to go. Skating to the Beatles’ song “A Day in the Life” for their short program, the two won North Korea’s first medal — a bronze — at the Asian Winter Games in Sapporo, Japan in February last year.

Following the example of former Soviet bloc countries like East Germany, Kim has elevated the role of sports to a new level for North Korea, lavishing praise and rewards on medal-winning athletes while the official media catalogues each win in international competition as proof of the nation’s ideological superiority and physical grit.

“Upon receiving the New Year Address made by respected Supreme Leader Kim Jong Un, sportspersons in the DPRK are filled with firm determination to achieve fresh victory,” its state-run news agency reported Tuesday, using the acronym for the North’s official name.

The report went on: “It is the determination and will of all sports officials, players and coaches to produce more excellent results in international games this year.”