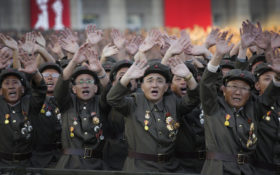 North Korean dictator Kim Jong Un isn’t happy that President Donald Trump is standing up to him — and as pressure mounts, it seems paranoia within their North’s leadership is running rampant.

Faced with the U.S. military’s unmatched strength and intense diplomatic pressure from Trump, North Koreans are practically pulling their hair out.

In fact, the panic has grown so bad, Kim Jong Un has started purging his own citizens.

North Korean media reported that Kim’s henchmen had discovered a “corrupted” and “bribed” a North Korean who also had the surname Kim, and say he was working with South Korean Intelligence Service (IS) and the CIA to kill the portly dictator during a public ceremony via a “biochemical” attack.

“The heinous crime, which was recently uncovered and smashed in the DPRK, is a kind of terrorism against not only the DPRK but the justice and conscience of humankind and an act of mangling the future of humankind,” Pyongyang said in an official statement.

“We will ferret out and mercilessly destroy to the last one the terrorists of the U.S. CIA and the puppet IS of South Korea.”

It’s no surprise that paranoia inside North Korea has gotten so out-of-control.

Since Trump has taken office, things have gone from bad to worse in the reclusive communist country.

It’s so bad, in fact, that Kim Jong Un and his leadership have quietly started asking for former President Barack Obama’s policies back.

Sorry, but that’s not happening.

The noose is tightening — and Kim Jong Un is feeling the squeeze.