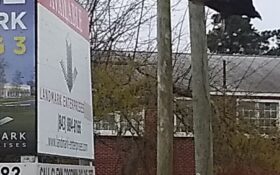 A North Carolina town finds itself under siege by buzzards, and nothing the locals do to scare them off seems to work.

The buzzards have chosen the town of Bunn as a meeting place for the past year, and they’re congregating at every available location, The News & Observer of Raleigh reported. On Wednesday, there were 28 buzzards perched on a cellular tower and another 21 at the high school across the street.

Ally Leggett said she counted 58 buzzards in her yard, on the roof, along the fence and atop the garage at one point. She said the unwelcome visitors would perch on her chimney and peck at the bricks, pulling them down.

Other locals say the buzzards ate the roof vents off a restaurant in the town about 30 miles (50 kilometers) northeast of Raleigh.

No one in Bunn seems to know why the scavengers have taken a shine to their town, but various attempts to evict them have failed.

In December, Bunn High School fired a propane cannon day and night. That worked for a while, police Chief Steve Massey said, but the birds returned.

The school also hung vulture effigies around its rooftop to deter the birds from gathering. That didn’t keep them away, either.

Commonly called buzzards, the birds are black or turkey vultures. Federal and state law outlaws killing, hurting or harassing them, according to the NC Wildlife Resources Commission.