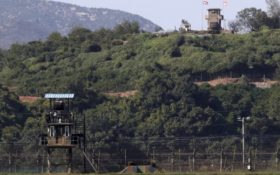 North and South Korean troops began removing some of the land mines planted at their heavily fortified border on Monday, Seoul officials said, in the first implementation of recent agreements aimed at easing their decades-long military standoff.

On Monday, South Korean army engineers with demining equipment were deployed to the border village of Panmunjom and another frontline area called “Arrow Head Hill” where the Koreas plan their first joint searches for soldiers killed during the 1950-53 Korean War.

The troops began removing mines on the southern part of the two sites. Later Monday, the South Korean military detected North Korean soldiers engaged in what it believed was demining on the northern part of the sites, a South Korean defense official said on condition of animosity, citing department rules.

At Arrow Head Hill, where some of the fiercest battles occurred during the Korean War, Seoul officials believe there are remains of about 300 South Korean and U.N. forces, along with an unspecified number of Chinese and North Korean remains.

The Korean War left millions dead or missing, and South Korea wants to expand joint excavations with North Korea for remains at Demilitarized Zone areas. The Koreas remain split along the 248-kilometer (155-mile) -long DMZ that was originally created as a buffer zone at the end of the Korean War. About 2 million mines are believed to be scattered in and near the DMZ, which is also guarded by hundreds of thousands of combat troops, barbed wire fences and tank traps.

Mines dislodged by flooding and landslides have occasionally caused deaths in front-line areas in South Korea. In 2015, a land mine blast blamed on North Korea maimed two South Korean soldiers and pushed the Koreas to the brink of war.

The agreement to clear mines, the first such effort since the early 2000s, was among a package of tension-easing deals struck by the Koreas’ defense chiefs on the sidelines of a leaders’ summit last month in Pyongyang. Aiming to reduce conventional military threats, they also agreed to remove 11 front-line guard posts by December and set up buffer zones along their land and sea boundaries and a no-fly zone above the border to prevent accidental clashes.

South Korean President Moon Jae-in said Monday the military deals will “end all hostile acts on land, sea and sky between South and North Korea.” In a speech marking South Korea’s 70th Armed Forces Day, Moon also called for a stronger national defense, saying “peace can continue only when we have power and are confidant of protecting ourselves.”

“I think it’s the worst-ever South-North Korean agreement that made a concession in our defense posture before (North Korean) denuclearization is achieved,” Shin Wonsik, a former vice chairman of the South’s Joint Chiefs of Staff, said last week.

Many experts say the fate of inter-Korean deals can be affected by how nuclear negotiations go between the United States and North Korea. Past rapprochement efforts were often stalled after a standoff over the North’s nuclear ambitions intensified.

After provocative tests of three intercontinental ballistic missiles and a powerful nuclear weapon last year, North Korea entered talks with the United States and South Korea earlier this year, saying it’s willing to deal away its expanding nuclear arsenal. Kim Jong Un has subsequently held a series of summits with U.S., South Korean and Chinese leaders and taken some steps such as dismantling his nuclear test site.

The nuclear diplomacy later came to a standstill amid disputes over how sincere North Korea is about disarmament. But Trump, Pompeo and other U.S. officials have recently reported progress in denuclearization discussions with the North. Pompeo is to make his third trip to North Korea soon.

Meanwhile, on Monday, South Korea held a ceremony marking the recent return of the remains of 64 South Korean soldiers missing from the Korean War. They were earlier found in North Korea during a joint 1996-2005 excavation project between the United States and North Korea. Forensic identification tests in Hawaii confirmed they belong to South Korean war dead, according to Seoul’s Defense Ministry.