North and South Korea on the brink of war? - The Horn News 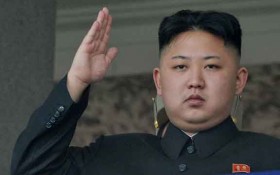 North and South Korea are on the brink of war – at least, according to the North. After both sides exchanged artillery barrages yesterday, North Korean leader Kim Jong Un on Friday declared his front-line troops in a “state of war” and ordered them to prepare for battle a day. South Korea has refused to back down from the North’s threats, making this is the most serious confrontation between the rivals in recent years.

South Korea’s military on Thursday fired dozens of artillery rounds across the border in response to what Seoul said were North Korean artillery strikes meant to back up a threat to attack loudspeakers broadcasting anti-Pyongyang propaganda.

The North’s apparent willingness to test Seoul with military strikes and its recent warning of further action raise worries because South Korea has vowed to hit back with overwhelming strength should North Korea attack again.

Kim Jong Un ordered his troops to be fully ready for any military operations starting Friday evening, according to a report in Pyongyang’s official Korean Central News Agency. The North has also given Seoul a deadline of Saturday evening to remove border loudspeakers that, after a lull of 11 years, have started broadcasting anti-Pyongyang propaganda. Failure, Pyongyang says, will result in further military action. Seoul has vowed to continue the broadcasts.

South Korea has evacuated hundreds of civilians from front-line towns.

Authoritarian North Korea, which has also restarted its own propaganda broadcasts, is extremely sensitive to any criticism of its government, run by leader Kim Jong Un, whose family has ruled since the North was founded in 1948. The loudspeaker broadcasts are taken seriously in Pyongyang because the government does not want its soldiers and residents to hear outsiders criticize human rights abuses and economic mismanagement that condemns many to abject poverty, South Korean analysts say.

Escalation is a risk in any military exchange between the Koreas because after two attacks blamed on Pyongyang killed 50 South Koreans in 2010, South Korea’s military warned that any future North Korean attack could trigger strikes by South Korea that are three times as large.

About 28,500 U.S. soldiers are deployed in South Korea to deter potential aggression from North Korea.