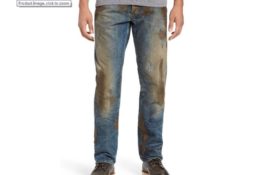 Department store Nordstrom is getting dragged through the mud on social media for selling a pair of dirty-looking jeans for $425.

Mike Rowe, who hosted the TV show “Dirty Jobs,” said in a Facebook post that the jeans were an example of the country’s “war on work” and called them “a costume for wealthy people who see work as ironic.”

Representatives at Nordstrom Inc. did not immediately respond to a request for comment. Efforts to reach PRPS, which makes the jeans and jacket, were unsuccessful.