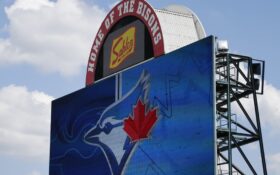 The signage is familiar. And well, really, that’s about it. But hey, it beats nothing. Or, to be more precise for the Toronto Blue Jays, it beats seeing their name on the bottom of a scoreboard in a visiting stadium for a game that is “home” in name only.

Baseball’s nomads will walk onto the field at Sahlen Field in Buffalo, New York, on Tuesday night as the host team for the first time in 2020. Canada’s government wouldn’t let the Blue Jays hold games at Rogers Centre in Toronto, fearful of outside entities coming into the city amid a pandemic. Pittsburgh offered to let the Blue Jays play at PNC Park when the Pirates were on the road, but Pennsylvania Gov. Tom Wolf wouldn’t sign off on it.

That left Buffalo, which last hosted a regular-season Major League Baseball game in 1915 when the Buffalo Blues finished sixth in the eight-team Federalist League.

The wait hasn’t been quite as long for the Blue Jays. Toronto spent the first two-plus weeks bouncing from Tampa to Washington to Atlanta to Boston waiting for preparations at 16,600-seat Sahlen Field (all but a few of which will be empty) to be complete.

Yes, it’s going to take some getting used to, no matter how many times the familiar Blue Jays logo is splashed on everything from bathroom sinks to elevator doors to dugouts. Instead of a Marriott situated over the right-center field fence, Ellicott Square — which served as the backdrop for all the hotel scenes in the 1984 classic film “The Natural” — sits across the street.

“We haven’t played in Buffalo, so it’s still a road trip it feels like,” said Toronto manager Charlie Montoyo, whose team is 5-8 after hopscotching up and down the East Coast. “But I’m going to say after the first couple of games, then it kind of becomes our home ballpark.”

A ballpark, by the way, that is not the one in which Robert Redford’s Roy Hobbs busted out all the lights in the climactic scene of “The Natural.” The movie was shot at War Memorial Coliseum, which gave way to Sahlen Field in the late 1980s, though you could forgive Miami Marlins manager Don Mattingly — whose team will be the visitors on Tuesday — for getting things mixed up.

“I’d never been to Buffalo in my life until this last winter,” said Mattingly, whose team dealt with a COVID-19 outbreak two weeks ago that disrupted its own season. “I think about the Bills, and then ‘The Natural.’ Are we playing in that same stadium?”

Instead, the Marlins and Blue Jays will find themselves working in a facility that might as well be a snapshot of the 2020 season. Sure, the lights have been upgraded, the infield received a makeover and nearly every available wall received a splash of blue paint. The real work, however, focused on making the 32-year-old stadium compliant with MLB health protocols put in place to deal with the COVID-19 pandemic.

Batting cages morphed into locker rooms. Washrooms became workout areas. The concourse is now a well-appointed gym. BAM Productions, which helps MLB put on the Little League Classic and NHL host the Winter Classic, took the lead in the transformation process. Some of the changes will be temporary. Some will be permanent. All of them are designed to help the Blue Jays relax and exhale, however briefly, about 100 miles south of the Rogers Centre.

“We want to make this feel like home for our guys,” Blue Jays vice president Marnie Starkman said.

First impressions were promising. Starkman called the reaction from the Toronto coaching staff during a brief tour of the facility Sunday night “pretty cool.”

Though the finishing touches weren’t put in place until this weekend, the process wasn’t as chaotic as the club initially feared. The Blue Jays had already designated Buffalo as Toronto’s alternate training site before Sahlen Field suddenly found itself as the best candidate to provide the big league club with temporary digs, meaning the lights were among the first things to arrive when the makeover began.

The process has led Mike Buczkowski, president of Rich Baseball Operations, the ownership group that runs the Bisons, to reevaluate what the franchise will do when things return to “normal” — or whatever passes for “normal” in a post-pandemic world.

“It’s really opened our eyes in terms of ‘do we really need the batting cages where we had them?’ Things like that,” Buczkowski said. “It’s getting us to reimagine the space.”

It will not, however, allow Buczkowski to reimagine Sahlen Field becoming a major league field full time. Buffalo was in the running in the early 1990s when MLB expanded to Denver and Miami. The economics that made sense back then may no longer make sense three decades later. Buffalo is the 52nd-ranked TV market in the country and Toronto, New York City and even Cleveland are all well within driving distance.

“We’ve always said it’s not that we wouldn’t have fans that would support MLB in Buffalo, it’s whether we’re a big enough market,” Buczkowski said. “You look at all the other revenues you need to generate, that’s the question … We didn’t really look at this is something if we do this well, we would become a major league baseball candidate.”

That doesn’t mean Sahlen Field won’t look major league ready when the city hosts its first big league game since Woodrow Wilson’s first term in the White House. Buczowski will take it in from his office, which offers a pretty good view of the action. The view will be even better for the Blue Jays, home at last. Sort of.