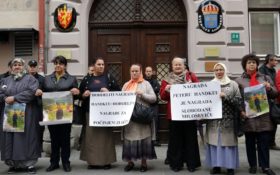 Nobel laureate Peter Handke has admitted that he had a Yugoslav passport in the 1990s but said he never had Yugoslav citizenship, his response to an investigation of whether he legally held on to his Austrian citizenship after obtaining the travel document.

Handke, who won the Nobel Prize for literature this year, told Belgrade newspaper Vecernje Novosti on Friday that he “got the passport to travel” and added that he never had Yugoslav citizenship.

It is not clear how Handke acquired the Yugoslav passport in 1999; at the time, the country required anyone obtaining the document to first apply for citizenship.

Since Serbia and Montenegro split apart in 2006, Yugoslav passports are no longer valid.

Authorities in Austria’s Carinthia province, where Handke lived before moving to France, have opened an investigation. Austrians taking another citizenship need to secure permission to keep their Austrian nationality.

Handke, who has long faced criticism for his vigorous defense of the Serbs during the 1990s’ wars in the Balkans, has repeatedly argued that Serbs did not commit genocide during the Srebrenica massacre in 1995 that left at least 8,000 Bosnian Muslim men and boys dead.

He has frequently visited Serbia in the ’90s and even spoke at the funeral of Serbia’s strongman Slobodan Milosevic, who died during his U.N. war crimes trial in 2006.

Bosnian war survivors, including mothers who lost husbands and sons in Srebrenica, protested Tuesday in Sarajevo, urging the Nobel Committee to reverse its decision to award the 2019 Nobel Prize to Handke.