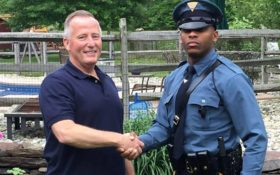 A New Jersey State Trooper got the surprise of a lifetime on Friday when he met a retired police officer who happened to have delivered him 27 years ago.

Trooper Michael Patterson pulled over retired cop Matthew Baily due to having tinted windows on his car… and luckily for Baily, Patterson never got around to writing up a ticket.

During their conservation, Baily had mentioned to the trooper that he was a retired cop from Piscataway, and one then fate took its course — and the two realized they were having an unplanned reunion.

Baily went on to ask Patterson where he used to live — and Baily suddenly realized that he remembered that street from a long time ago.

“Bailly said that he remembered that street, because he helped deliver a baby there 27 years ago when he was a rookie cop. He was even able to describe the color, style of house, and the baby’s name, Michael,” New Jersey State Police wrote.

That was when Patterson extended his hand out to Baily and stated, “My name is Michael Patterson, sir. Thank you for delivering me.”

Baily had been on the job for four years when he responded to a call that the trooper’s mother had gone into labor while out shopping and barely made it home. The trooper’s father rushed his wife into their home and called the doctor who was then able to walk Baily through the birth.

The miracle reunion touched both Patterson and Baily so much that their families decided to come together once again.

Both the young trooper and his mother visited Baily at his home and took photos together because they were so ecstatic about their reunion that they felt their story should be shared.

“After all, as a police officer, you don’t always get a chance to have a moment like this with people you once helped in your career!” New Jersey State Police wrote on Facebook.