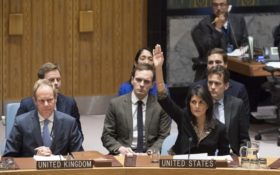 Just one day after destroying U.N. globalists in public, Ambassador Nikki Haley is at it again.

Haley is serving notice the U.S. “will be taking names” on a U.N. General Assembly vote Thursday on a nonbinding resolution criticizing President Donald Trump’s decision to recognize Jerusalem as Israel’s capital.

Emergency sessions of the General Assembly are rare, and Haley chose her Twitter account Tuesday to speak out.

What she said was powerful — and it has Trump voters cheering —

At the UN we're always asked to do more & give more. So, when we make a decision, at the will of the American ppl, abt where to locate OUR embassy, we don't expect those we've helped to target us. On Thurs there'll be a vote criticizing our choice. The US will be taking names. pic.twitter.com/ZsusB8Hqt4

Haley, who has adopted an aggressive stance at the world body on U.S. priorities, noted the pending vote “criticizing our choice” and said “the U.S. will be taking names.”