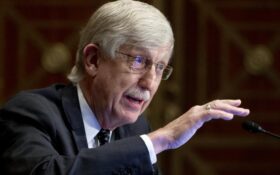 The director of the National Institutes of Health, Dr. Francis S. Collins, says he is stepping down by the end of the year, having led the research center for 12 years and become a prominent source of public information during the coronavirus pandemic.

“There comes a time where an institution like NIH really benefits from new vision, new leadership,” Collins, 71, said in an interview with The Washington Post. “This was the right timing.”

A formal announcement was expected Tuesday from the NIH. The Post and Politico reported Collins’ plans Monday night.

Based in Bethesda, Maryland, and a part of the Department of Health and Human Services, the NIH is the nation’s medical research agency and operates more than two dozen institutes and centers. It lays claim to being the largest supporter of biomedical research in the world.

Collins was appointed director in 2009 by President Barack Obama and was asked to remain in that post by Presidents Donald Trump and Joe Biden. He is the only presidentially appointed NIH director to serve under multiple administrations.

In the interview with the Post, Collins said he had decided not to stay too long into the Biden administration and was confident that the NIH’s role in developing therapeutics, tests and vaccines for the coronavirus had reached “a pretty stable place.”